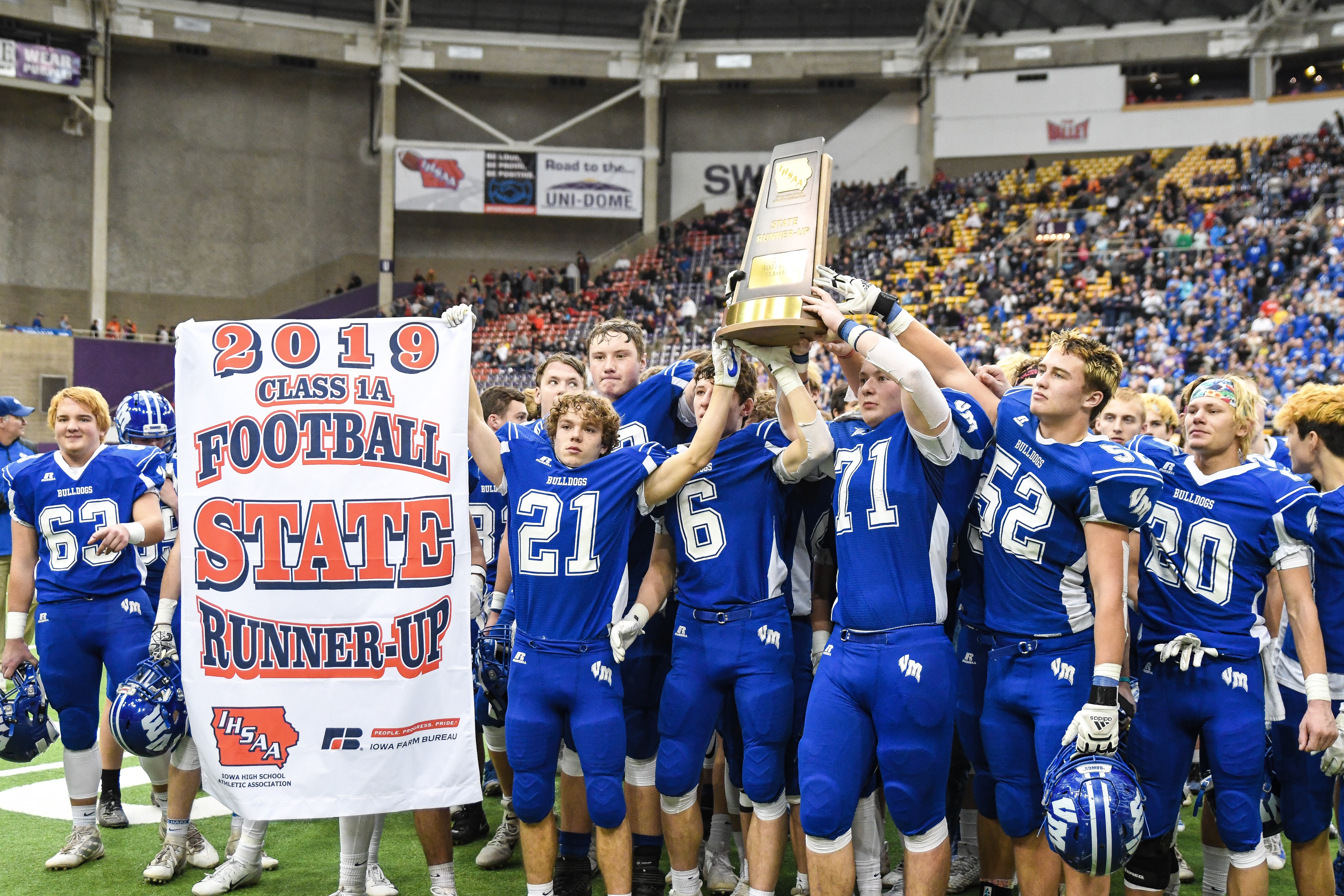 The Van Meter Bulldogs were making their second trip to the Class 1A State Championship game in the past three years and would face a fairly familiar opponent in the West Lyon Wildcats. The Bulldogs had beaten West Lyon in the semifinal two years ago. However, this time around the Wildcats would leave no doubt as they would claim the 2019 Class 1A State Championship with a 50-14 win over Van Meter.

Van Meter would force the Wildcats to punt on the first possession of the game. The Bulldogs also couldn’t get anything going on their first possession, but an errant snap on Van Meter’s first punt of the game would set West Lyon up with favorable field position at the Van Meter 43 yard line. The Wildcats would capitalize just 3 plays later on a 40 yard touchdown pass to gain the early advantage at 7-0. The Bulldogs would respond with a scoring drive of their own on their next possession, which would be highlighted by a 38 yard run by Anthony Potthoff to set the Bulldogs up on the West Lyon 8 yard line. Two plays later, Ian Abrahamson would punch it into the end zone on a 1 yard run and Zach Madden would tack on the PAT to tie the game at 7-7 early in the 2nd quarter.

However, West Lyon would capitalize on several costly Van Meter mistakes and turnovers as the Wildcats would score on three of their four possessions in the 2nd quarter. Following the Abrahamson TD, the Wildcats would score on a 19 yard run to regain the lead 14-7. Three plays later, Potthoff would throw only his second interception of the season as he scrambled to try to gain a first down. The Wildcats would score again on the very next play to extend their lead to 21-7. On Van Meter’s next possession, a mix-up in the snap count would cause the Bulldogs to snap the ball out of the end zone for a safety as the deficit would grow to 23-7 in favor of West Lyon. On the ensuing free kick, Blade Koons would unleash an 80 yard punt, which would be a new school record, for a touchback to try to allow the Bulldogs to catch their breath. However, West Lyon would tack on one more score on a 36 yard touchdown pass on the final play of the first half and the Bulldogs would find themselves down 29-7.

Van Meter would receive the opening kickoff of the second half, but were forced to punt after just three plays. West Lyon would again march down the field and score to extend their lead to 36-7. West Lyon would score twice more in the second half, but the Van Meter players continued to fight for the entire game as Potthoff would find Parker Fryar on a 28 yard touchdown pass in the 4th quarter. Madden would add one more PAT for his career, but it would not be enough as West Lyon (12-1) would secure a 50-14 victory and the 2019 Class 1A State Championship.

Van Meter’s offense would be held to its lowest output of the season and the Bulldog defense wouldn’t fare any better against a West Lyon team that proved to be dominant on both sides of the ball. The Bulldogs could only muster 11 first downs and 236 total yards of offense to the Wildcats 21 first downs and 413 total yards. The 50 points allowed by the Bulldog defense were more points than they had allowed to their previous three playoff opponents combined.

Van Meter (12-1) finishes the 2019 campaign as the Class 1A Runner-Up and the District #8 Champions. This was the Bulldog’s sixth trip to the UNI-Dome in the past seven years as they improved their overall record in the playoffs to 25-17, which places Van Meter in the Top 40 out of over 300 football-playing schools in the state of Iowa for playoff wins.

The Van Meter Bulldogs have amassed an 85-13 overall record the past 8 seasons, including winning 59 of 63 regular-season games since the start of the 2013 season. Over the past four seasons, the Bulldogs are 47-3 overall. In addition, Van Meter is 43-1 against district opponents since September 28, 2012, and this would include 30 consecutive district victories during that time. Finally, the Bulldogs are currently tied for 8th all-time in the history of Iowa football with 44 consecutive regular-season wins.

Thank you to all Bulldog parents, fans and the Van Meter community for your support this season!