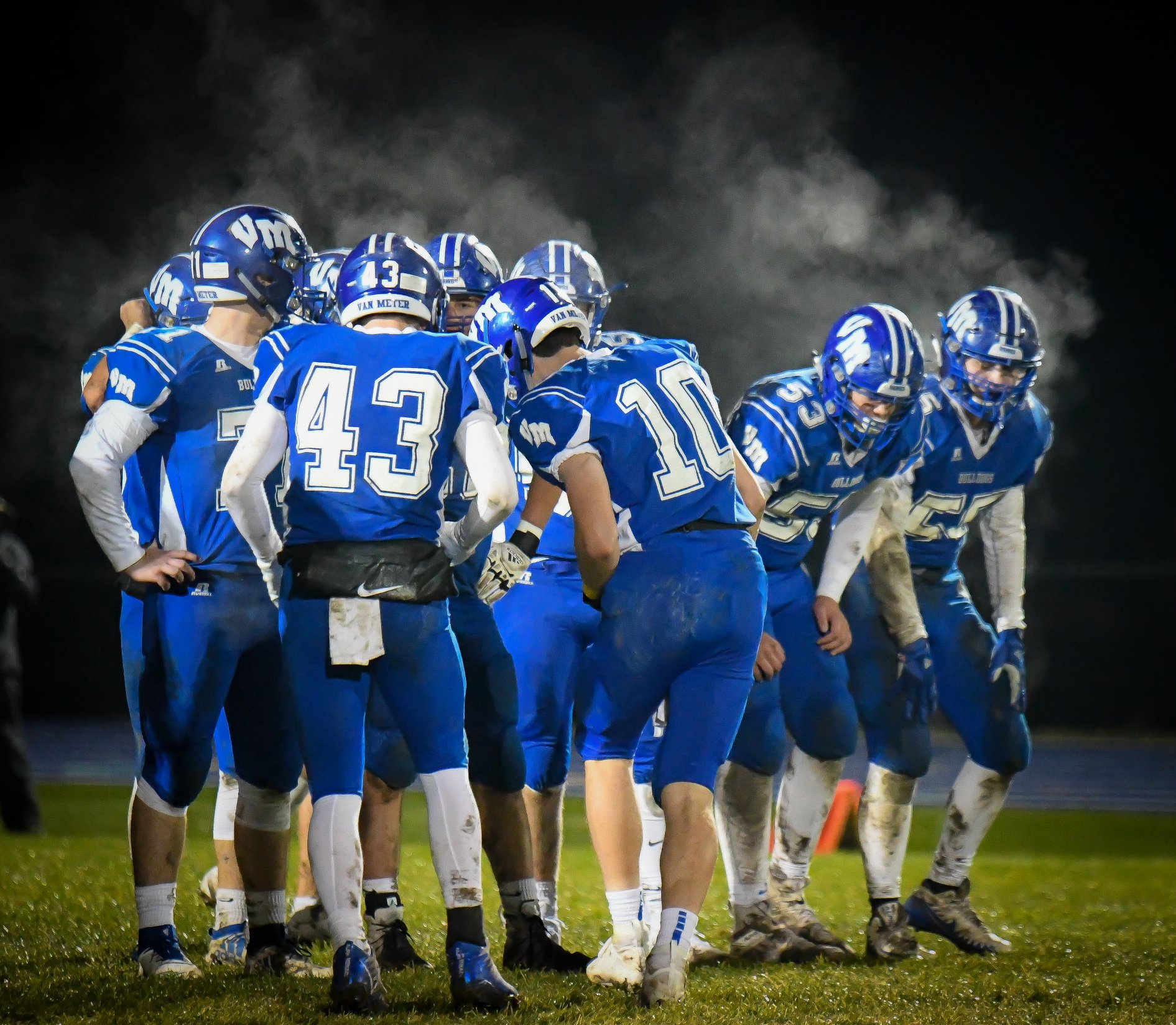 Van Meter would meet a familiar opponent for the 1st Round of the 2019 IHSAA football playoff when the Pella Christian Eagles (5-4) would visit Van Meter this past Friday night. The Bulldogs had beaten the Eagles in Week #2 of the regular season 40-6, but the home team knew that result wouldn’t matter as this time around both teams were battling to win and advance in the post-season.

The Bulldogs would encounter a little bit of adversity to start the contest. The Van Meter D would force Pella Christian to punt on their first possession, however the punt would hit a Bulldog on the return team, and the Eagles would recover it to put their offense right back on the field at the Van Meter 23 yard line. Five plays later, the Eagles would score the games first touchdown but miss the PAT to lead 6-0. Even though this would be the first score the Bulldogs have allowed in the 1st Quarter all season, they would respond in a big way. On the home team’s first drive of the game, they would emphatically march 60 yards on only 7 plays as Anthony Potthoff would find Zach Madden on 4th down with a 17 yard touchdown pass. Madden, who made every PAT of the game, would add the extra point and the Bulldogs regained a lead they would never relinquish at 7-6. After the Bulldog defense forced a 3-and-out and another Eagle punt, Van Meter would strike again on a 2 yard touchdown run by Dalten Van Pelt to extend the lead to 14-12 at the end of the 1st quarter.

In the 2nd quarter, Van Meter would continue to apply as much pressure as possible. The Bulldog defense would gain the first turnover of the game on Pella Christian’s next possession as Brett Berg would recover a fumble on Van Meter’s 32 yard line. Just under 4 minutes later, the Bulldogs would find the end zone again as Potthoff would hit Blade Koons this time for a 10 yard score and a 21-6 Bulldog lead. On the Eagles next possession, they would attempt to go for it on 4th down only to be met by a host of Bulldog defenders that would stop them short. Van Meter’s offense would take over and grind out another score as Potthoff would score for the first time with his legs on 1 yard plunge to send the Bulldogs into halftime up 28-6.

Van Meter would get the ball to start the 2nd half and would pick up right where they left off in the 1st half. The Bulldogs would put together a 9 play, 54 yard drive that would be finished off with Van Meter’s first field goal of the season as Madden would connect on a 23 yard attempt to push the lead to 31-6. Two plays later, Madden would get his hands on the ball with his third interception of the season set the Bulldog offense up again at the Van Meter 38 yard line. Four plays later, Potthoff would finish off the scoring for the Bulldogs behind some outstanding blocking as he would scamper 53 yards to extend the lead to 38-6. The Eagles would find the end zone again in the 4th quarter as the final score would be 38-12 and the Bulldogs would advance to the next round of the playoffs.

Van Meter’s offense was clicking on the night as they would score on their first six drives of the game and did not punt until the 4th quarter. The Bulldogs would roll up 404 yards of total offense (266 rushing & 138 passing) to only 244 yards for the Eagles. For the third time this season, Van Meter would have two ball carriers pass the 100 yard mark. Dalten Van Pelt would lead all rushers with 129 yards on 29 carries, which were career-highs in both categories, and Potthoff would carry the ball 11 times for 119 yards. Finally, Potthoff would complete 9 of 11 passes for 138 yards and 2 touchdowns behind some outstanding work of the Bulldog offensive line.

According to the IHSAA Post-Season Manual, ticket prices for the Quarterfinal Round games will be $8 per person.
(No school activity passes or district football passes will be accepted.)

Van Meter (10-0) will meet South Central Calhoun (10-0) in the Quarterfinals of the IHSAA playoffs this Friday, November 8th in Van Meter at 7:00 PM! The winner will move on to the IHSAA Semifinals at the UNI-Dome in Cedar Falls on Saturday, November 16th.