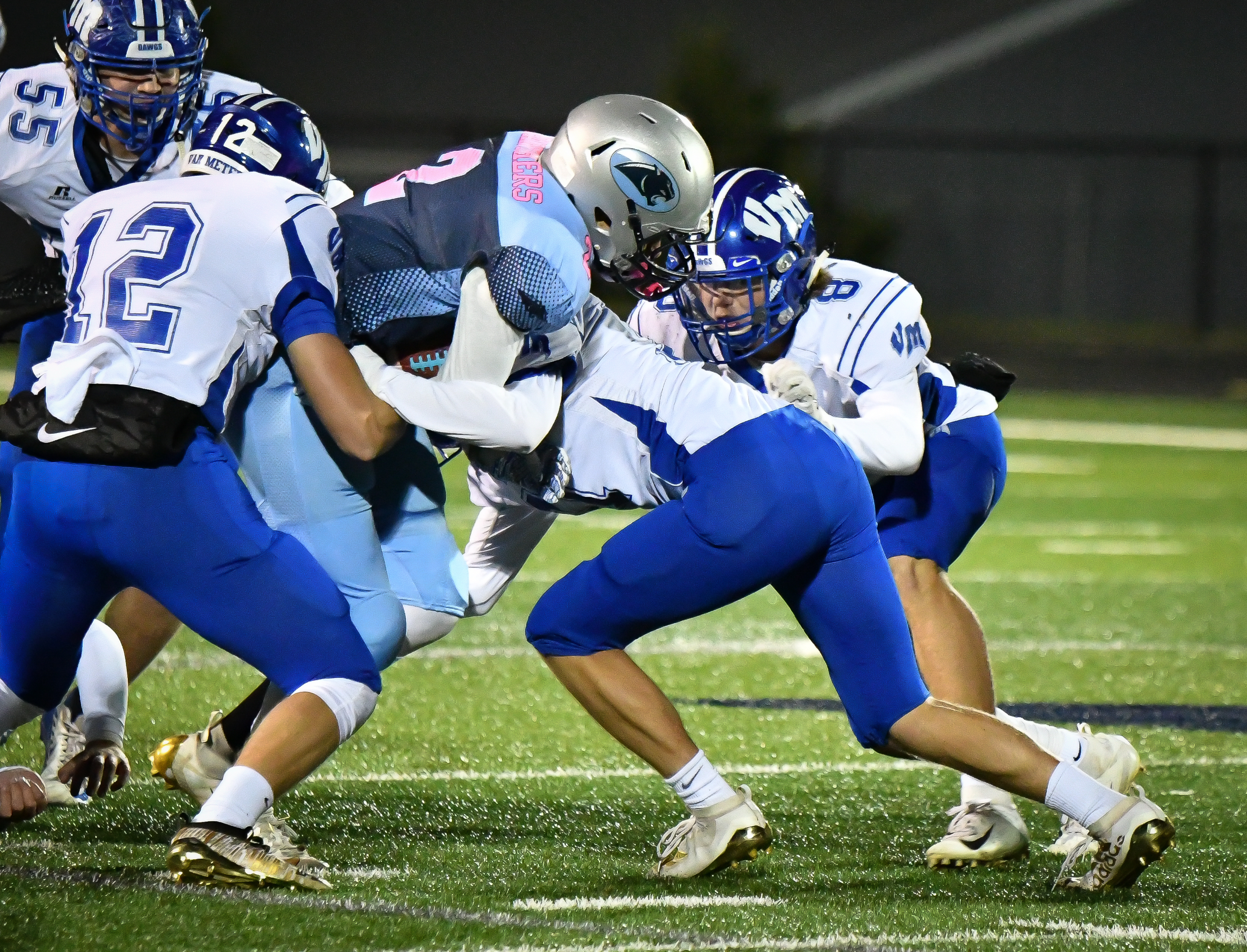 With 1st place in Class 1A District 8 on the line, the Van Meter Bulldogs used a stifling defense and a methodical ground attack to grind out a 20-0 victory over the Panthers from Panorama. Both teams entered the contest at 6-0, so it was bound to be a hard-fought battle on a cold, windy night for the entire 48 minutes.

Van Meter received the opening kickoff of the game and proceeding to engineer their longest drive of the season. The Bulldogs would march 65 yards on 17 plays that would be capped off by Ian Abrahamson on a 1 yard TD run. Every play of the drive was a running play that would consume 8:58 of the 1st quarter to put the Bulldogs up 6-0. On Panorama’s ensuing possession, Van Meter’s defense would make a strong opening statement as well by forcing a punt after only 3 offensive plays.

Van Meter would also be forced to punt on their next possession, but they would get another opportunity when Abrahamson broke through to block Panorama’s next punt attempt. The Bulldog offense would take advantage of the prime field position by driving 52 yards in only 5 plays. This time Anthony Potthoff would find Cody Coffman in the back of the end zone with a 29 yards touchdown pass to extend the lead to 12-0. Calvin Sieck would come up with his first interception to stop another Panorama drive, but the Bulldog offense was unable to capitalize so the teams would go to halftime with Van Meter leading 12-0.

The second half saw more ball control from the Van Meter offense as well as tough defense. The Bulldogs would take advantage of the wind and force a short punt by Panorama to begin a drive on the Panther 22 yard line. After a series of penalties, Abrahamson would break loose behind some outstanding blocking to score from 28 yards out. Following a 2-Pt conversion pass from Potthoff to Coffman, Van Meter would stretch their lead to 20-0. Panorama was not able to get past their own 28 yard line on any drive in the 2nd half as Van Meter’s defense was just too much on this night.

Van Meter’s offensive stats were not particular eye-opening other than the fact that the Bulldogs ran 63 offensive plays to only 38 for the Panthers. The Bulldogs also had the ball for over 21 minutes more than Panorama and would accumulate 15 1st downs to only 5 for their opponent. Van Meter’s defense would ultimately limit Panorama to only 48 total yards, which is the 4th fewest yards allowed in the last 20 years, compared to 244 yards for the Bulldogs.

Van Meter (7-0) will travel to Mount Ayr next Friday, October 18th to take on the Raiders (6-1) at 7:00 PM. This game has big playoff implications for both teams with only 2 weeks remaining in the regular season. Your support is greatly appreciated!
Come on out and support your Bulldogs!