Two undefeated teams would face off for the 2020 Class 1A State Championship game this past Friday at the UNI-Dome in Cedar Falls as the Van Meter Bulldogs, ranked #2 and 11-0, would face the #1 ranked OABCIG Falcons, who were also 11-0 and had won the Class 2A State Title in 2019. Both teams would battle for the entire 48 minutes in what would go down as an all-time great game between two great teams.

The Falcons would receive the opening kickoff and their high-powered offensive attack would get the first opportunity with the ball. However, Chris Schreck would intercept the Falcons on the third play of the game and set the Bulldog offense up on their own 21 yard line. Van Meter would take advantage of this first possession by marching 79 yards on 9 consecutive running plays to score on a 20 yard run by Dalten Van Pelt. The Bulldog’s 2-point conversion attempt would fail though, so the Bulldogs would take a 6-0 lead. OABCIG would respond quickly as it would only take them three plays to even the score at 6-6 on a 37 yard pass play. But the Falcons would also miss their PAT attempt, so the score would remain tied at the end of the 1st Quarter. This would be a theme for the game as Van Meter would lean heavily on its running game, while the Falcons would use their air attack to their advantage.

As the game transitioned to the 2nd Quarter, the Bulldogs would once again go on a long 12 play drive eating 6:45 off the clock. Van Meter would, unfortunately, turn it over as a Falcon would intercept a 4th & 9 pass from Jack Pettit on the OABCIG 1 yard line. Van Meter’s defense would respond and eventually force the first punt of the game to get the ball back. Van Meter would use 10 running plays and 2 plays to cover 76 yards to score the second touchdown of the game on 4th down via an 11 yard pass from Pettit to Ganon Archer. Will Gordon would add the PAT and the Bulldogs would regain the lead at 13-6. OABCIG would get one more opportunity to score again before halftime, but their drive would end with a missed field goal attempt as time expired.

Van Meter would get the first chance with the ball to start the 2nd Half but would be forced to punt. OABICG would waste little time as they would score on an 11 yard pass to cap a 5 play drive covering 60 yards in just 1:03. However, the PAT would once again be no good, so the Bulldogs would maintain a slim 13-12 lead. Van Meter would fight back with a scoring drive of their own. This time the Bulldogs would drive 70 yards on 11 plays as Pettit would pass to Kobe Richards in the front, left corner of the end zone for the score. Gordon would tack on the PAT and Van Meter would extend its lead to 20-12. The Falcons would once again answer a score with a score on their next drive on an 8 yard pass to pull within 2 points of Van Meter. OABCIG would elect to go for 2 points and tie, but Ben Gilliland would knock the pass attempt down, so the Bulldogs would maintain a 20-18 lead at the end of the 3rd Quarter.

Both teams would start the 4th Quarter by trading punts. Van Meter would then take advantage of their next opportunity with the ball as the Bulldogs would drive 91 yards on 8 plays. Dalten Van Pelt would run it in from the Falcon 10 yard line, but the PAT attempt would be blocked so Van Meter would only lead by 8 points at 26-18. OABCIG would drive all the way to the Van Meter 11 yard line, but the Van Meter defense would make a stand as Alex Jones would break up a 4th down pass to give the Bulldogs the ball back with 3:01 left in the game. The Bulldogs would not be able to pick up a first down, so they would be forced to punt the ball back to the Falcons. Once again, OABCIG would waste little time finding the end zone as they would score on a 4 yard touchdown run with 1:30 remaining in the game. The Falcons would once again go for the 2-point conversion to tie the game and this time they would run it in to knot the game up at 26-26. On the ensuing kickoff, the Falcons would force and recover a Bulldog fumble and, on the very next play, OABCIG would take their first lead of the game on a 19 yard run. The PAT would be good and the Bulldogs would trail for the first time 33-26 with 1:11 remaining in the game. Van Meter would attempt to mount one last drive but would turn it over on downs as a pass would be batted down on 4th down and the Bulldogs would suffer their first loss of the season 33-26.

The Van Meter Bulldogs would finish the 2020 season at 11-1 and as the Class 1A Runner-Up for the second consecutive year. Van Meter has lost a total of four games over the past five seasons, for an overall record of 58-4 during this run. Each of the Bulldogsͬ four losses in that span has come at the hands of the eventual state champions. During these last 4 years, the Bulldogs have been the 2017 State Champion, 2018 Semifinalist as well as the 2019 and 2020 State Runner-Up in Class 1A. 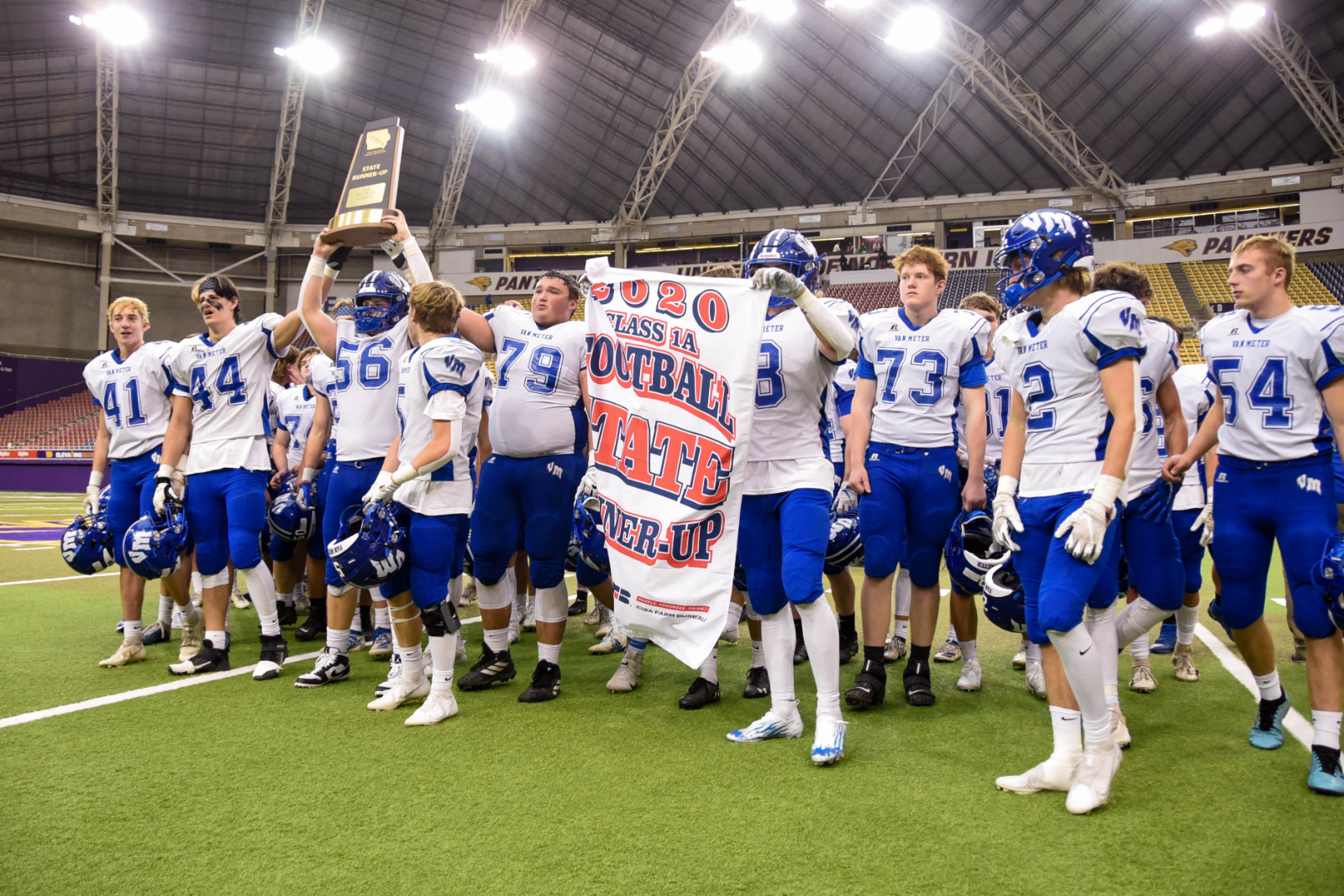 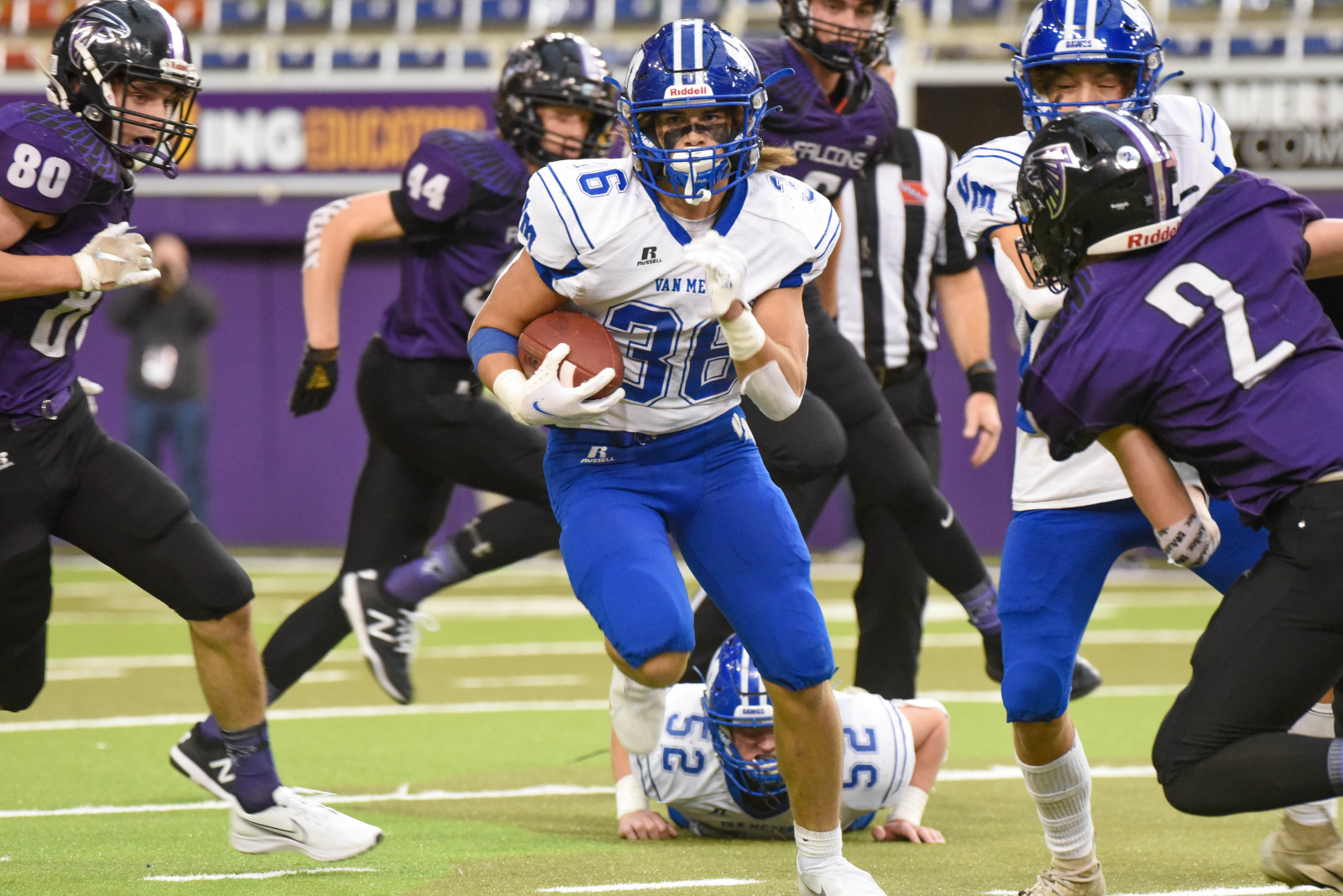 Dalten Van Pelt rushed for 233 yards on 39 carries. Van Pelt’s 39 carries were the second-most ever in a game by a Van Meter back and tied the 1A championship game record. This was the 11th consecutive game he rushed for 100+ yards and Van Pelt finished the season atop class 1A with 2000 rushing yards. Dalten became just the third running back in Van Meter’s history to reach the 2000 yard mark in a single season. Jack Pettit would also rush for 110 yards on 20 carries to go along with completing 4 of 11 passes for 54 yards and 2 touchdowns. This was the fourth time in 2020 both players crossed the century mark in the same game.

Please click on the following link for complete offensive and defensive stats from the game:
Van Meter 26 – OABCIG 33 (Game Stats)