Van Meter would face what has become a familiar playoff opponent in the Class 1A Semifinals this past Saturday in the Titans from South Central Calhoun. The recent match-ups between the two teams had resulted in a couple of instant classic football games. The Bulldogs have won both of the previous match-ups as they pulled out a tight 28-26 quarterfinal win back in 2015 to go along with last year’s 10-6 defensive slugfest in the same quarterfinal round. This time the Bulldogs and Titans would meet at the UNI-Dome in Cedar Falls with a trip to the Class 1A State Championship game on the line so it was expected that this would once again be a hard-fought contest throughout.

The Bulldogs would receive the opening kickoff and proceed to go on a 14 play drive that would eat up over five minutes of the 1st Quarter. However, Van Meter’s offense would turn it over on downs after failing to convert a 4th down on the Titan 21 yard line. The Bulldog’s defense would shine early though as they forced a punt after 3 plays by the SCC offense, so Van Meter’s offense would go back on the attack. This time they would march 73 yards on 7 plays and score the game’s first touchdown on 16 yard run by Dalten Van Pelt. After the PAT was blocked, the Bulldogs would lead 6-0 at the end of the 1st Quarter.

The 2nd Quarter wouldn’t see any scoring but both teams would march up and down the field. South Central Calhoun would drive all the way to Van Meter’s 31 yard line before they would fail on their own 4th down conversion attempt. On Van Meter’s third drive of the game, they would get the ball all the way down to the Titans 10 yard line before a costly fumble would end the drive. The Titans would try to capitalize on this miscue as they would once again drive deep into Bulldog territory. However, this time their drive would be stopped on another 4th Down as Casey Trudo would sack the Titan quarterback to end the threat right before halftime, so the score remained 6-0 at the break. 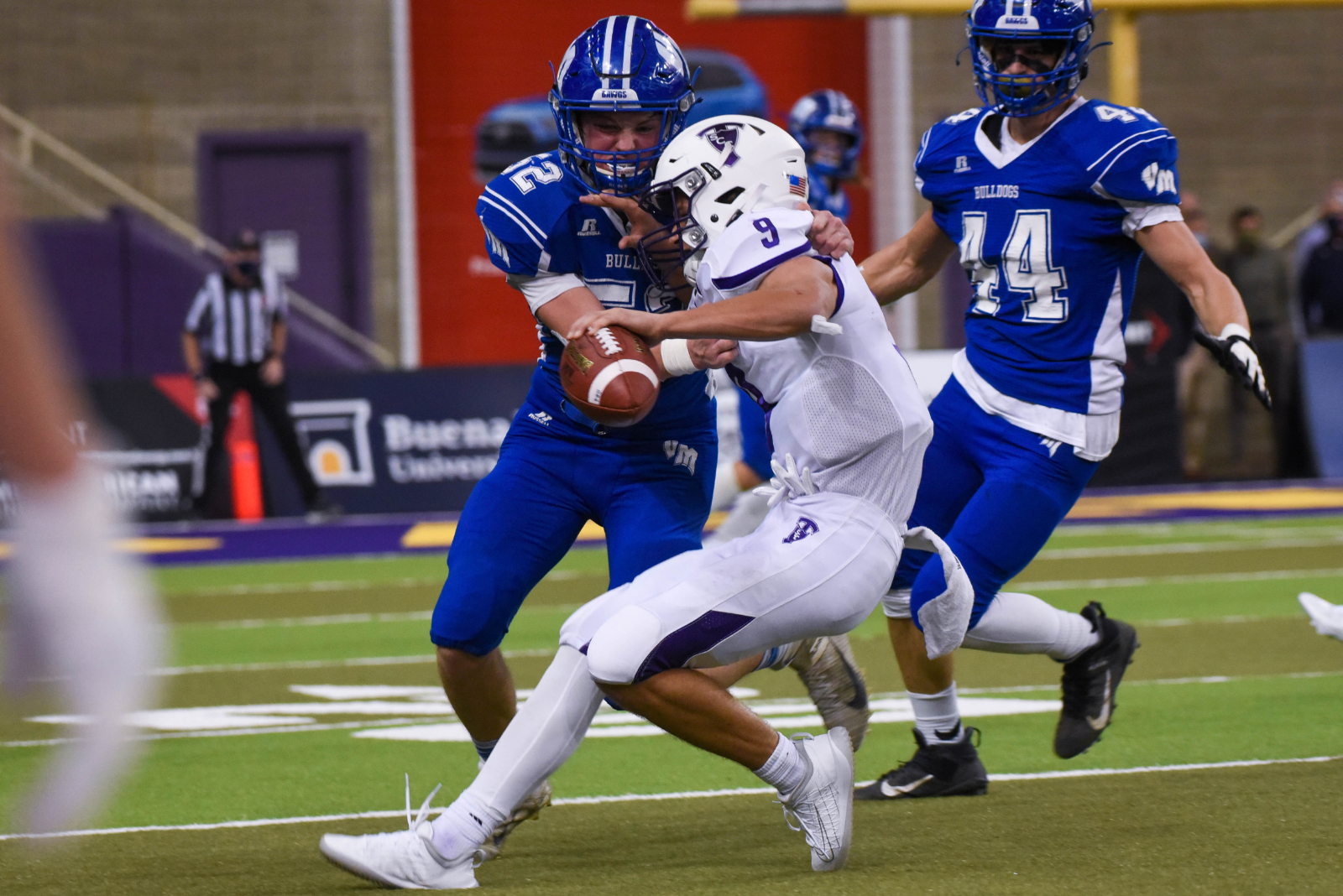 South Central Calhoun would try to take the momentum to start the 3rd Quarter as they would score on a 1 yard run to cap off a 13 play drive. However, the PAT would be missed by the Titans kicker so the score would be tied at 6-6. Van Meter would be forced to punt on their next possession, so it looked like South Central Calhoun was ready to sieze control of the game. The Bulldog defense would once again step up as Trudo would once again sack the Titan QB on SCC’s own 4 yard line for a 13 yard loss to end the 3rd quarter still tied at 6-6.

On the first play of the 4th Quarter, Dalten Van Pelt would apply pressure on the pass attempt and Alex Jones would get his first interception of the game to set up Van Meter’s offense on the Titan 38 yard line. Five plays later, Jack Pettit would score on a quarterback sneak from 1 yard out and the Bulldogs would lead again 13-6 following Will Gordon’s PAT. On SCC’s next possession, a Titan pass would bounce off of a couple of different players before Jones would once again cut in front of a receiver for his second interception of the game. However, the Bulldogs would fail to convert the turnover into points as their field goal attempt just missed. 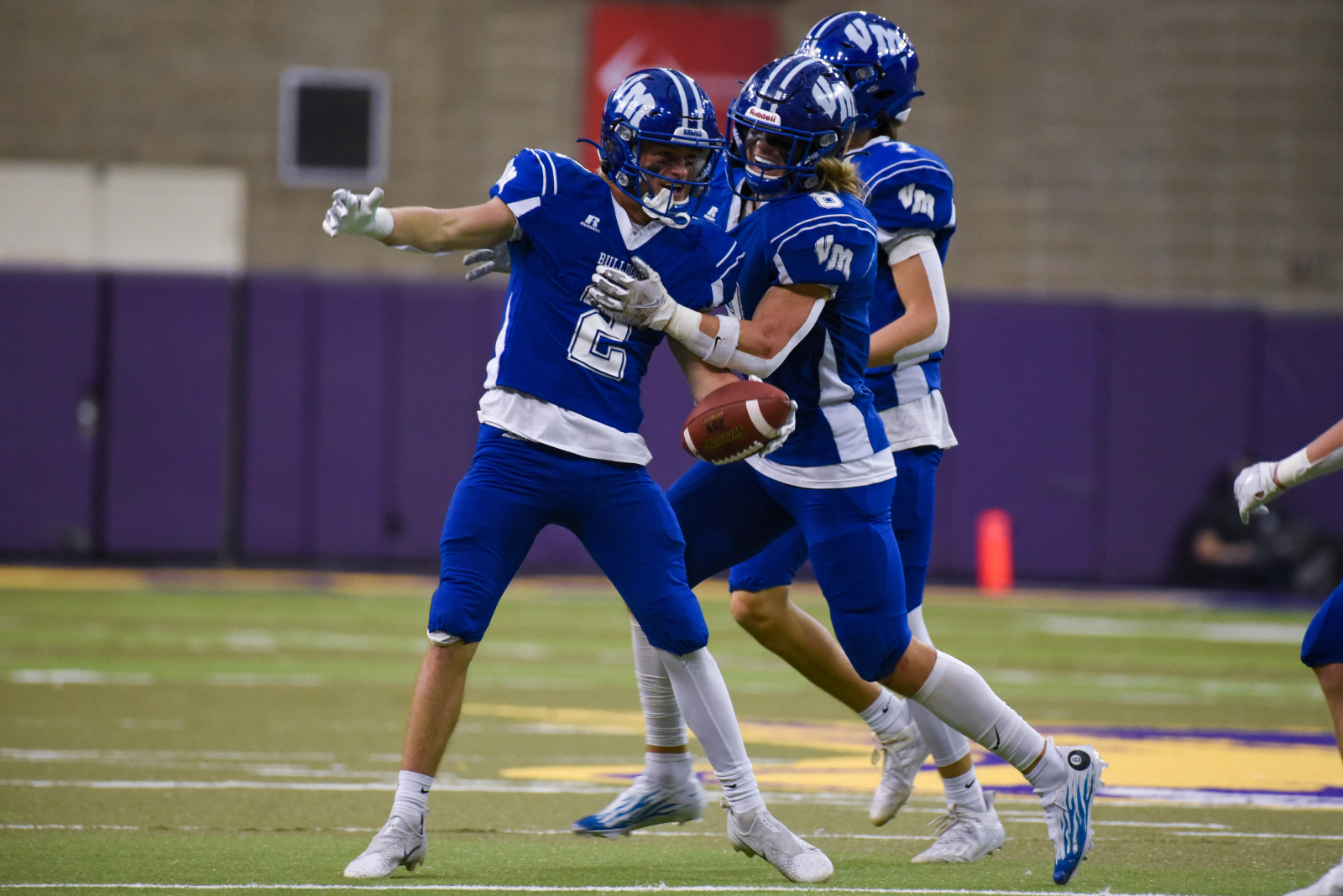 It wouldn’t take long for Van Meter’s offense to get another chance though. The Titans would pass on 3rd down needing just 5 yards to keep their drive going. After the pass would bounce off a receiver and the hands of a defender, Ganon Archer would make a diving interception to get the Bulldogs the ball back at the SCC 24 yard line. This time Van Meter would take advantage of the Titan turnover as Pettit would find Archer wide open in the end zone on a 16 yard touchdown pass on 4th down. After Gordon’s extra point conversion, Van Meter would have a little breathing room as their lead extended to 20-6 with only 2:25 left in the game. However, the Titans fought back as it would only take them 2 plays to find the end zone and cut the Bulldog lead to 20-12 following a failed 2-point conversion attempt. On the ensuing kickoff, SCC would attempt an onside quick which was recovered by Van Meter and the Bulldogs would convert a 4th and 1 for a first down to run out the clock. The 20-12 victory would send the Bulldogs back to the Class 1A State Championship game for the third time in four years, which includes winning the 2017 Class 1A State Championship. 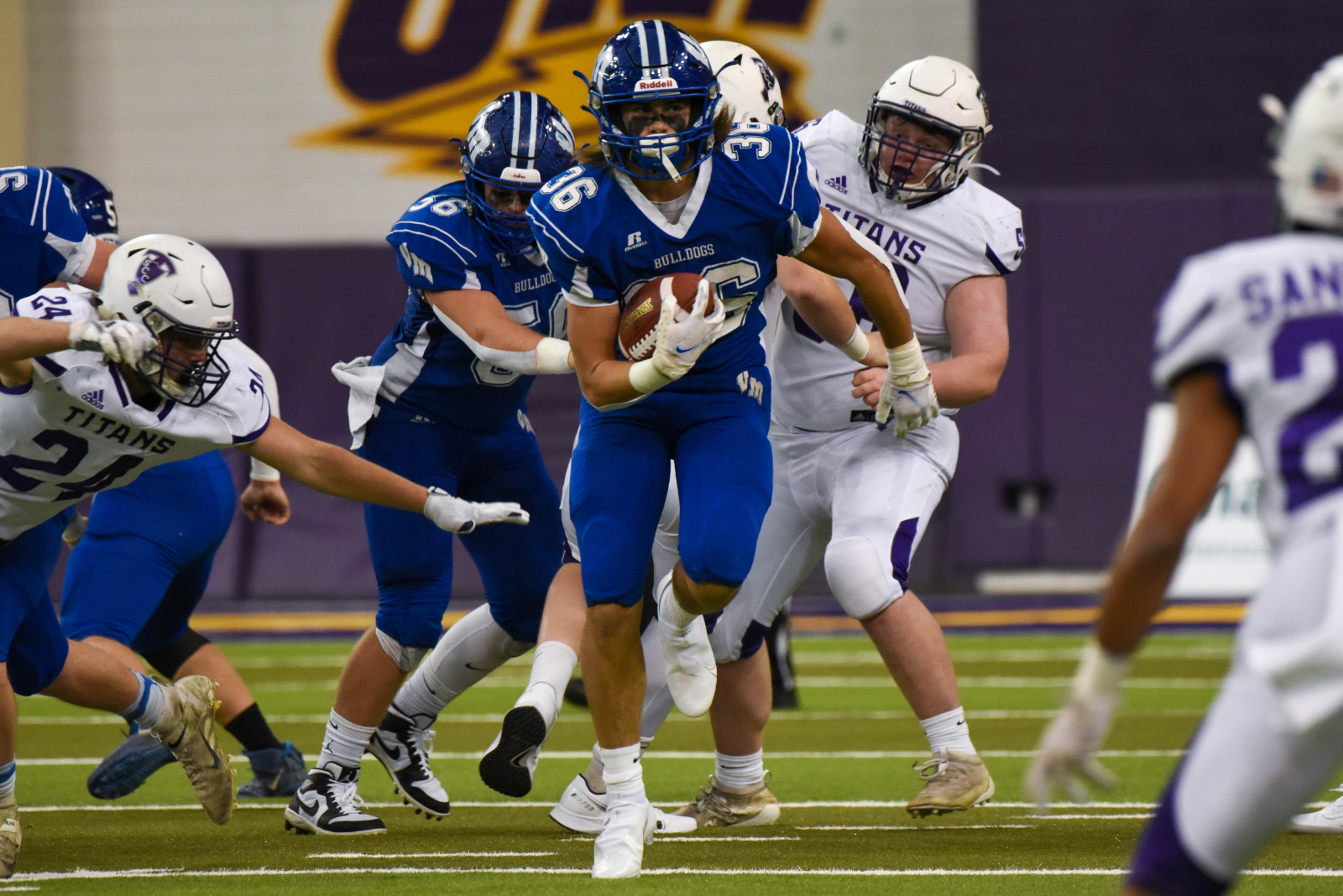 Offensively, Van Meter’s leading rusher was once again Dalten Van Pelt as he would gain 170 yards on 29 carries and 1 touchdown. Van Pelt has rushed for 809 yards in the Bulldog’s four playoff games, an average of 202.3 yards per game, while also being his 10th consecutive game rushing for over 100 yards. Jack Pettit was 10 for 16 passing for 109 yards and 1 touchdown as well as rushing for 71 yards on 17 carries. Maddox Artzer would lead the Bulldogs in receiving as he caught 4 passes for 33 yards. Van Meter’s offense rushed for 219 total yards to go along with 109 yards passing for 328 total yards and 20 first downs. Meanwhile, the Bulldog defense would only allow the Titans to gain 177 total yards and 3.5 yards per play, which was their lowest output offensively since 2018. Another key to the game was Van Meter would have a time of possession advantage of 28:26 for the Bulldogs to 19:34 for SCC.