The Van Meter Bulldogs welcomed the Underwood Eagles to town this past Friday evening for a game that would determine who would make a trip to the UNI-Dome in Cedar Falls for the Class 1A final four. Underwood’s only loss of the season had been to the #1 ranked team in Class 1A, OABCIG, during district play, so the Bulldogs knew they would be facing a very high-quality opponent with multiple weapons.

Underwood would receive the opening kickoff but the Bulldogs would force the Eagles to punt after just 3 plays. On Van Meter’s first possession, the Bulldogs would drive to the Underwood 33 yard line where they would face a 4th and 9. On the 4th down play, Jack Pettit would find Chris Schreck over the middle for 23 yards and a first down at the Eagle 10 yard line. Three plays later, Pettit would find Dalten Van Pelt for an 8 yard touchdown pass and Will Gordon would add the PAT to give Van Meter the early 7-0 lead. Underwood would respond with a 17 play, 81 yard drive to tie the game 7-7 with 26 seconds remaining in the 1st quarter.

The Bulldogs would throw an interception on their next drive as the 2nd quarter would get underway. However, Van Meter’s defense would not allow the Eagles to gain a first down and Underwood would be forced to punt the ball back to the Bulldogs. This time the Bulldogs would take advantage of their opportunity as they would drive 79 yards on only 7 plays. A key play on the drive would be Maddox Artzer’s 50 yard catch and run that would get the Bulldogs inside the Underwood 5 yard line. Dalten Van Pelt would carry it over the goal line on the next play and Gordon would again tack on the PAT as Van Meter would regain the lead at 14-7. The Eagles would certainly not go away as they once again put together a long scoring drive on their next possession covering 64 yards on 12 plays to tie the game once again at 14-14, which would be the score at the halftime break.

Van Meter would receive the opening kickoff of the 2nd half, but would be forced to punt for the first, and only time of the game. The Bulldog defense would get their own interception on Underwood’s next drive as Allen Van Pelt picked off a pass deep over the middle and would return it to the Eagle 40 yard. Van Meter would proceed to march to Underwood’s 12 yard line before the Bulldogs would once again face a 4th down decision. This time Pettit would hit Ganon Archer with a pass in the right corner of the end zone as the Bulldogs once again regained the lead at 20-14. On the ensuing kickoff, Carter Durflinger would recover the onside kick for Van Meter and the Bulldogs would be right back on offense. Six plays later, Pettit would get his first rushing score of the night on a 6 yard touchdown run and Van Meter would extend its lead to 26-14 at the end of the 3rd quarter. 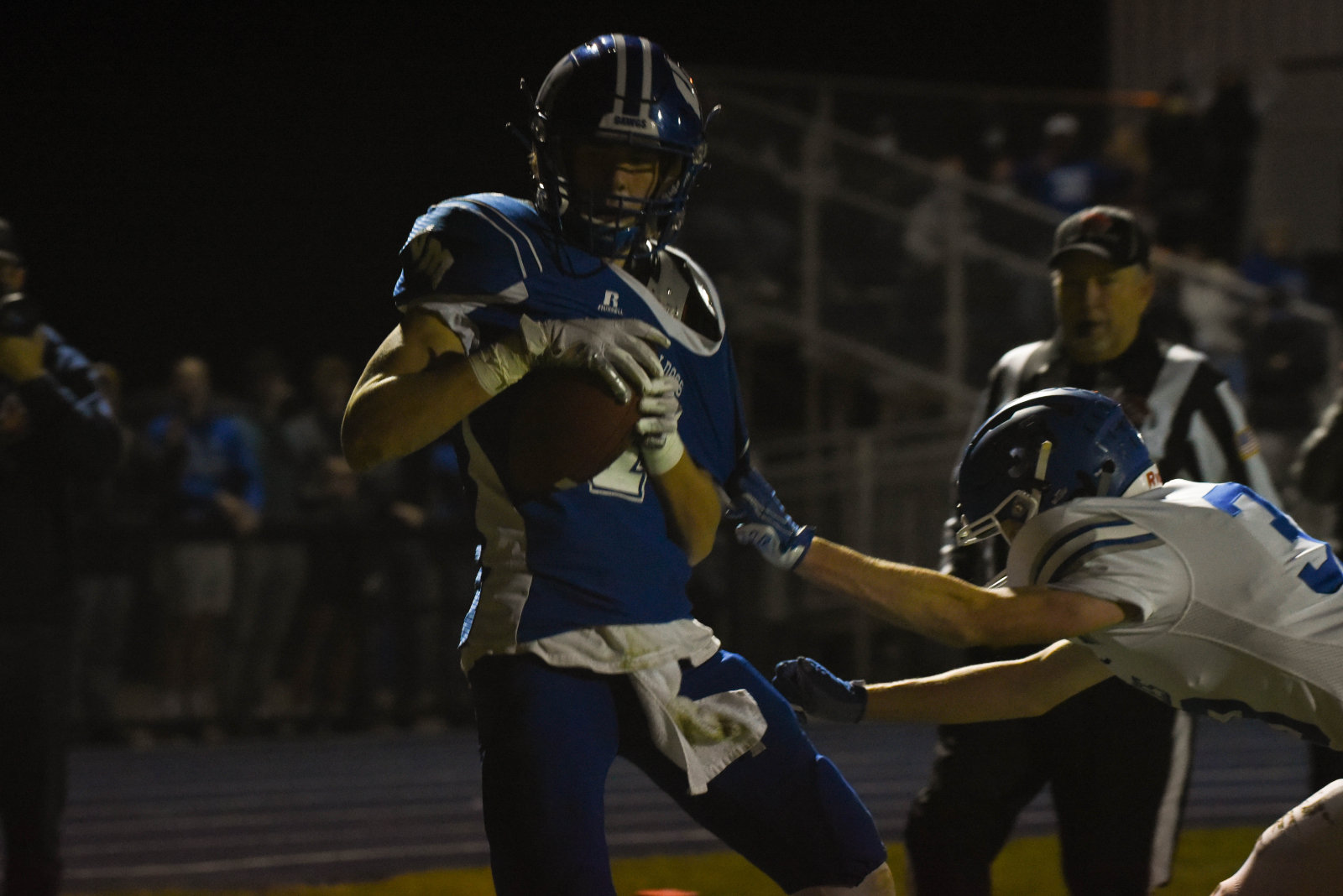 Underwood would attempt to mount a comeback as the Eagles would drive all the way to Van Meter’s 30 yard line on their next drive. However, Max Gilliland would tackle the Eagle running back on an attempted screen pass on 4th down to turn the ball back over to the Bulldog offense. Van Meter would proceed to put together a nearly six-minute drive covering 70 yards on 11 plays as Dalten Van Pelt would get his second rushing TD of the game from 3 yards out. Gordon would make the PAT and Van Meter would build its lead to 33-14 with only 3:55 remaining in the game. Underwood would have one last drive, but that would end as the Bulldog D would once again for a turnover on downs at Van Meter’s 6 yard line. Van Meter would move on to the UNI-Dome and the state semifinals for the 6th consecutive year with the 33-14 victory. 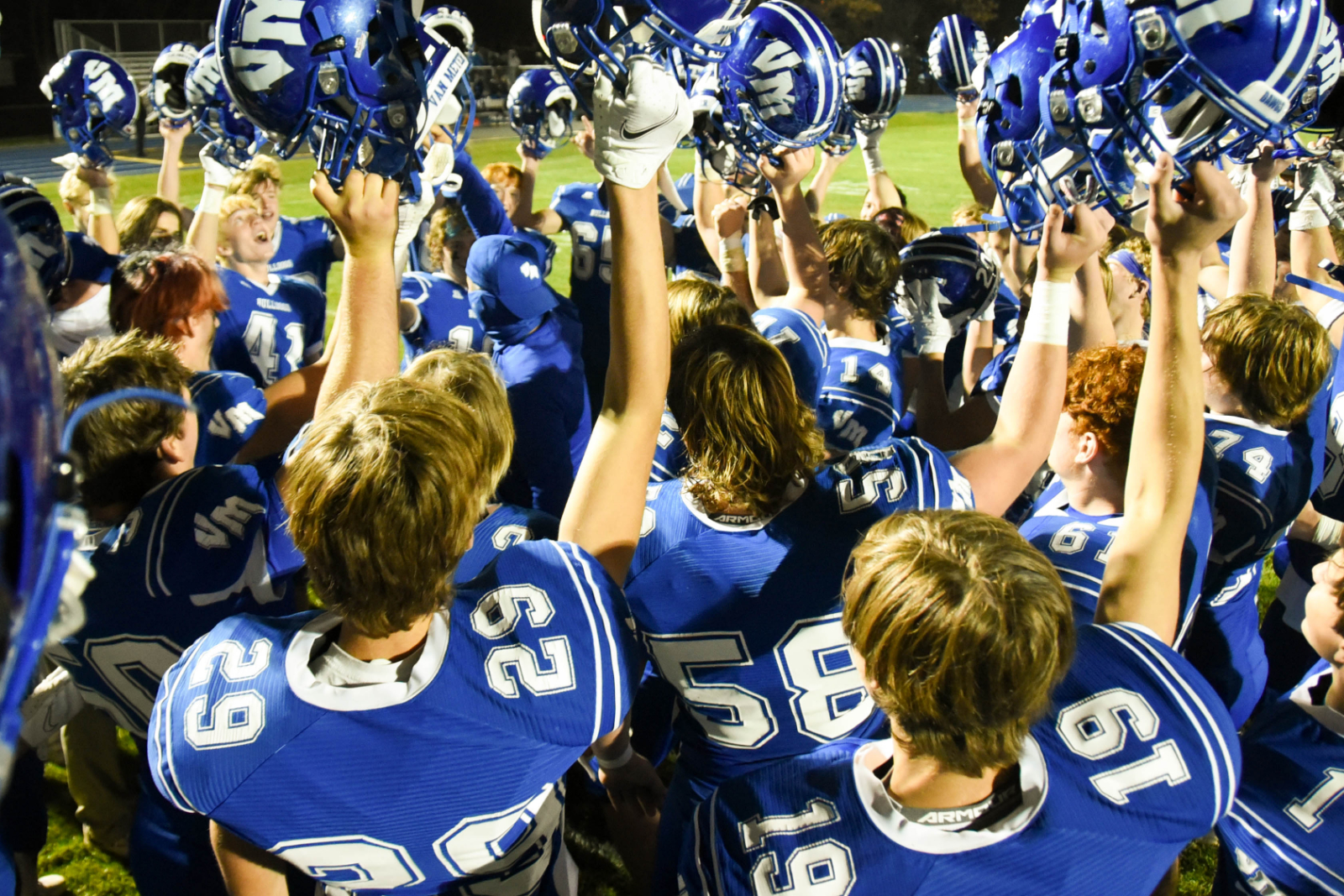 Dalten Van Pelt would be the Bulldog’s leading rusher with 164 yards on 33 carries as he passed the 100 yard mark for the 9th consecutive game. Jack Pettit would also gain 99 yards on the ground along with completing 6 of 10 passes for 104 yards. Van Meter’s offense would roll up 366 total yards and 24 first downs in a really complete effort. On the defensive side of the ball, the Bulldogs would limit the high-powered Eagle offense, which had been averaging almost 400 yards of offense per game, to only 265 total yards.

Please click on the following link for complete offensive and defensive stats from the game:
Van Meter 33 – Underwood 14 (Game Stats)

Van Meter (10-0) will take on South Central Calhoun (9-1) in the Semifinal Round of the IHSAA Class 1A Playoffs at 9:00 AM on November 14th at the UNI-Dome in Cedar Falls.