Van Meter entered the final week of the regular season with a district championship on the line as they traveled to Woodward-Granger to take on the Hawks. The Bulldog offense and defense would be very effective throughout the game en route to a 41-0 victory and an 8th consecutive district championship for Van Meter.

The Bulldogs would receive the opening kickoff of the game and despite multiple penalties, Van Meter was able to complete a 17 play, 80 yard drive that would be capped off by a 19 yard touchdown run up the middle by Dalten Van Pelt. Following the PAT by Will Gordon, Van Meter took an early 7-0 lead.

After both teams would trade punts on their next possessions, Van Meter would take control of the game late in the 2nd quarter. First, Dalten Van Pelt would find the end zone for a second time on a 7 yard run with 4:57 remaining before halftime. Next, the Bulldog D would force a 3-and-out on the Hawk’s next possession limiting them to zero yards on those 3 plays. And eight plays later, Jack Pettit would score on a 7 yard TD run of his own just before halftime. Gordon would tack on both PATs and the Bulldogs would lead 21-0 at the halftime break.

The Bulldogs would extend their lead just 1:20 seconds into the 2nd half with the only score of the 3rd quarter coming on a 17 yard pass from Pettit to Calvin Sieck. The PAT would again be good by Gordon and Van Meter would lead 28-0. Van Meter would tack on two additional scores in the 4th quarter with Carter Durflinger scoring on a 1 yard touchdown run and Chris Schreck catching a 10 yard TD pass from Pettit to make the final 41-0.

Van Meter’s offense would rack up another season-high for total yards in a game. The Bulldogs churned out 26 1st Downs on 463 total yards, which would include 268 rushing yards and 195 yards passing, behind a great effort by the Van Meter offensive line. Dalten Van Pelt would have 188 rushing yards and 72 receiving yards on the night. His 260 total offensive yards was the most by a Bulldog since 2011. In addition, Van Pelt surpassed the 100 yard mark for the 6th consecutive game this season. Pettit would go 12 for 19 passing for 195 yards and 2 TDs and Chris Schreck would have 4 catches for 38 yards to lead the Bulldogs in receptions for the game. 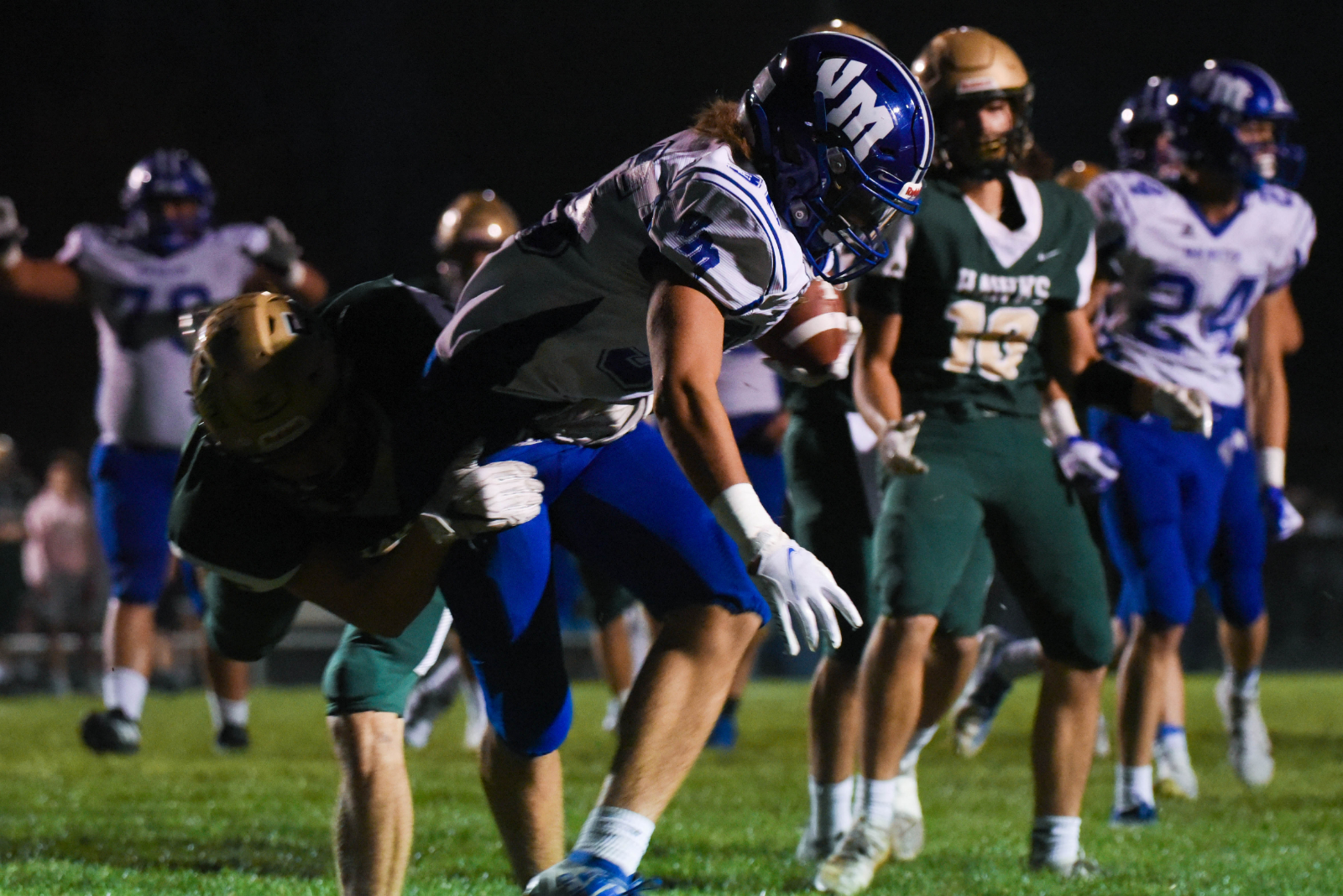 Defensively, Van Meter would limit the Hawks to only 6 1st Downs, 48 yards rushing and 27 yards passing, so the Bulldog D limited Woodward-Granger to only 1.7 yards per offensive play, which is the 5th fewest by a Van Meter opponent in the last ten seasons. In addition, the Hawks would not be able to advance any deeper than the Bulldogs’ 48 yard line all game. 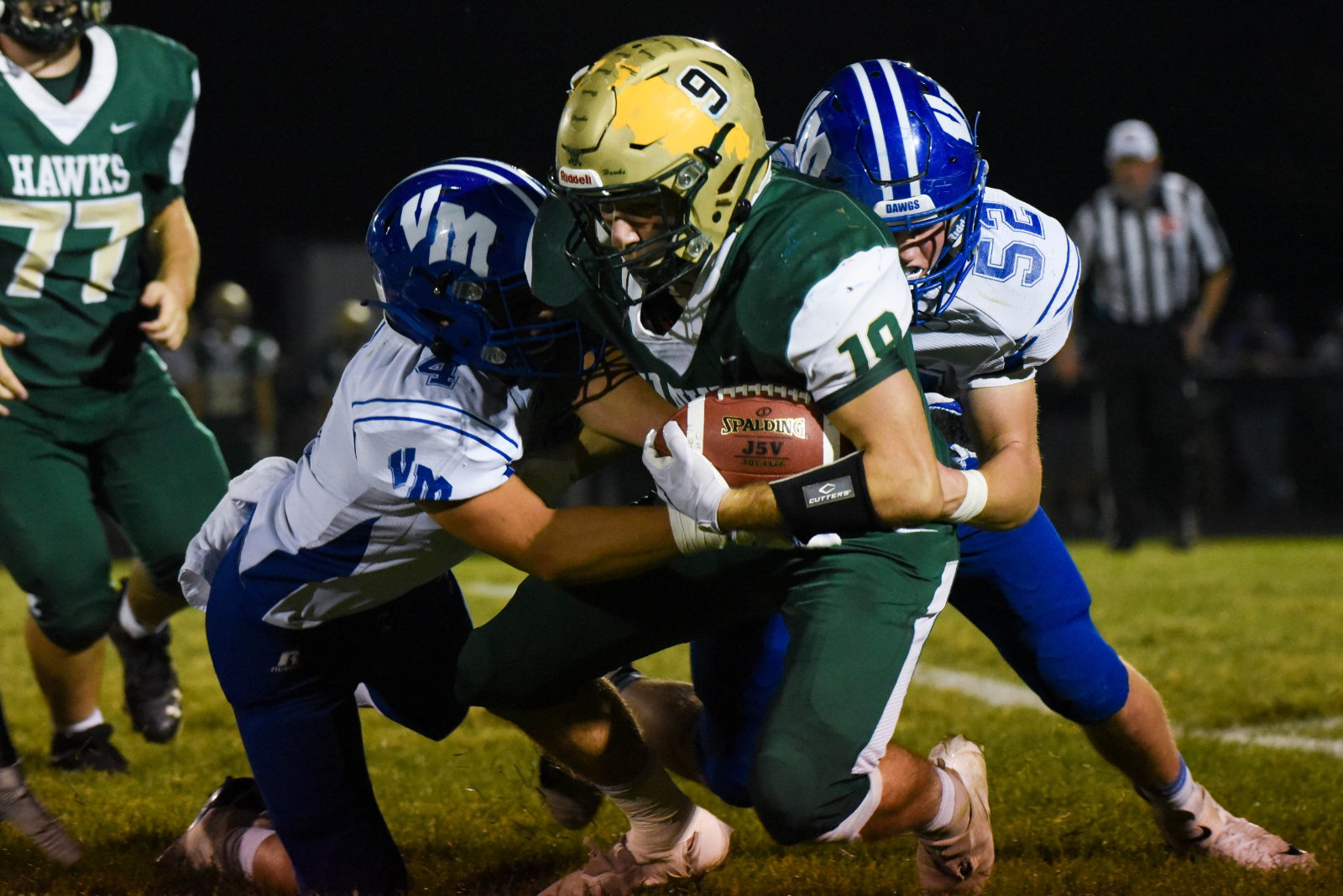 Please click on the following link for complete offensive and defensive stats from the game:
Van Meter 41 – Woodward-Granger 0 (Game Stats)

Click Here for Week 7 Football Scores from the IHSAA

Van Meter (7-0) will enter the post-season for the 13th consecutive year, receiving a 1st Round BYE in Class 1A Pod 13 for the IHSAA Playoffs. The Bulldogs will host the winner of the AC/GC vs. Pleasantville game at 7:00 PM on October 23rd in Van Meter.