Van Meter traveled to Carroll to take on the Kuemper Knights for the very first time this past Friday night. The Bulldogs would come away with a hard-fought victory 35-18 that would push their season record to 6-0 as they remained in the lead for Class 1A District 8.

The Bulldogs would start strong as they would score twice in the first quarter. Dalten Van Pelt would score the first Van Meter touchdown on a 6 yard run. Will Gordon, who would be 5 for 5 on his PAT’s for the night, tacked on the extra point and the Bulldogs would have a quick 7-0 lead. Just over 2 minutes later, Jack Pettit would find the end zone on a 57 yard run that would push the lead to 14-0.

The 2nd quarter didn’t see any scoring until late in the 1st half when Pettit would get his second rushing touchdown of the game with only 38 seconds remaining before halftime. Van Meter appeared to be ready to take a 21-0 lead into halftime, but Kuemper would mount their own last-ditch effort of the half. Following a good kickoff return by the Knights, Kuemper would strike for their first score of the game on a 24 yard pass with just 3 seconds left on the clock. This would cut the Bulldog lead to 21-7 as the teams entered the halftime break.

Van Meter would again struggle to find the end zone a little bit in the 3rd quarter until Pettit would find Maddox Artzer on a 70 yard touchdown catch and run that would extend the Bulldog lead to 28-7. Following a Kuemper field goal, Pettit would find Caden Peterson on a 29 yard touchdown pass this time to make the score 35-10. The Knights would add a late touchdown and 2-point conversion with only 13 seconds remaining in the game, so the final score would be 35-18 in favor of the Bulldogs. 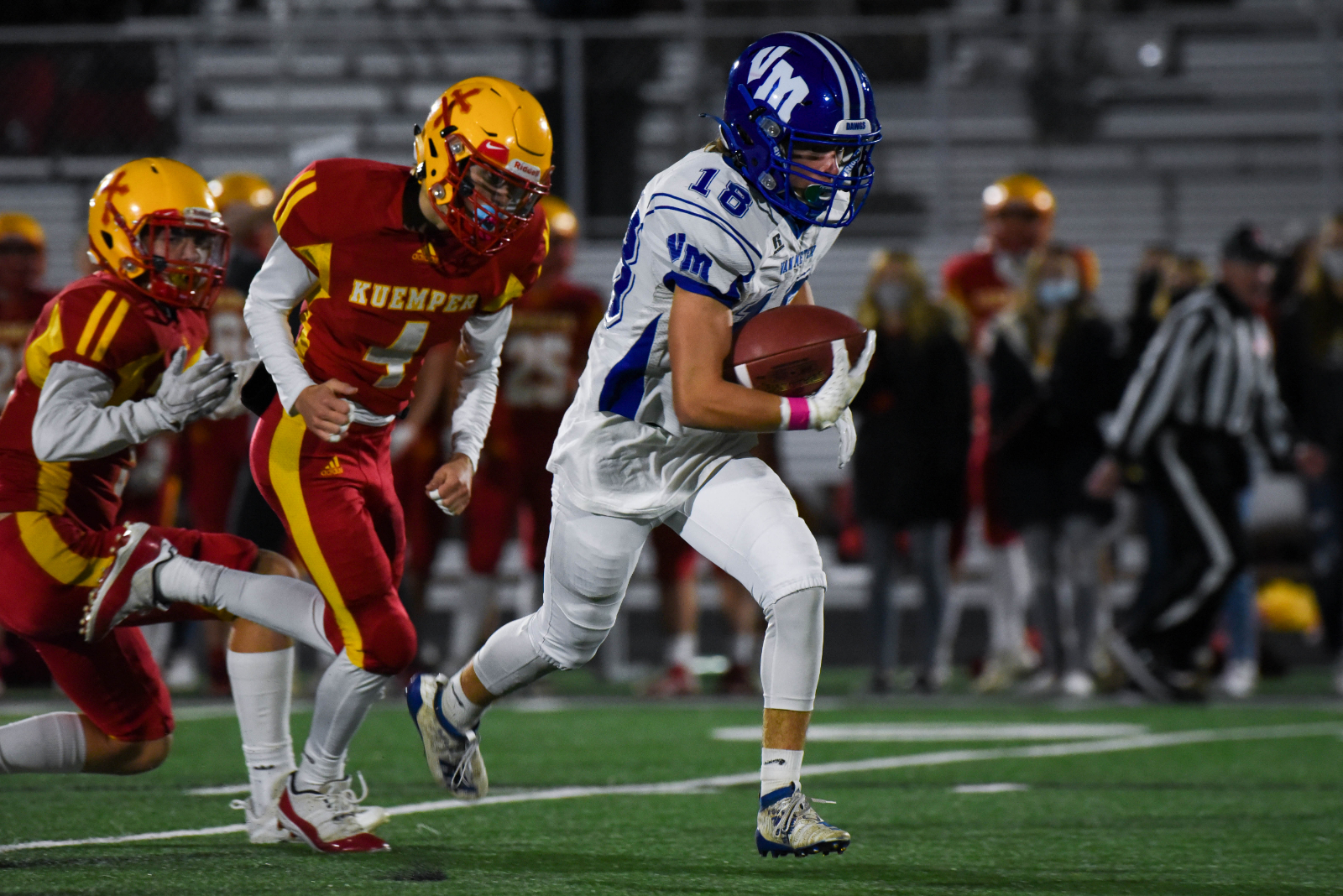 The Van Meter offense would roll up season-highs for both total offense, 457 yards, and rushing yards, 303 yards, for the game. Dalten Van Pelt and Jack Pettit would both pass the century mark in rushing yards as Van Pelt rushed for 163 yards on 30 carries and Pettit would rush for 135 yards on 15 carries. Maddox Artzer would lead Van Meter in receiving with 2 catches for 82 yards and that 1 touchdown. Van Meter’s defense continued to make things very tough for their opponent’s offenses as they would limit the Knights to only 90 yards rushing on 30 attempts and 219 total yards for the game.

Please click on the following link for complete offensive and defensive stats from the game:
Van Meter 35 – Kuemper 18 (Game Stats)

Click Here for Week 6 Football Scores from the IHSAA

Van Meter (6-0) will travel to Woodward this Friday, October 9th as they will take on the Woodward-Granger Hawks (5-1) at 7:00 PM! It will be the final regular season game for both teams.