The Van Meter Bulldogs traveled to Panora this past Friday evening to take on the Panorama Panthers for the 12th time in the history of this match-up. On a damp evening, both defenses were very tough early, but the Bulldogs would find a way to pull out the victory to start Class 1A District #8 play.

The Bulldogs and Panthers would trade punts on the first three possessions of the game. Van Meter would then drive deep into Panther territory on their second drive but would turn it over on downs at the Panorama 17 yard line. The Bulldog defense would step up and force a Panther punt attempt just 4 plays later. However, the Panorama punt snap would be high and sailed over the punters head into the end zone. For the Bulldogs, Carter Duflinger would nearly recover the ball for a touchdown, but it would squirt out of the back of the end zone for a safety as a couple of players were fighting for the ball. So with 6:32 remaining in the 2nd quarter, Van Meter would lead 2-0.

After the free-kick, the Van Meter offense would start its next drive at the Bulldog 42 yard line. On the second play from scrimmage, Dalten Van Pelt would bust through a big hole and scamper 55 yards for the first touchdown of the game and extend the lead to 8-0. On the ensuing kickoff, Allen Van Pelt would force a fumble that would be recovered by Kobe Richards and the Bulldog offense would be back on the field at the Panorama 23 yard line. Four plays later, Dalten Van Pelt would get his second TD of the game as he would run it in untouched from 10 yards out. Caden Tost would add the PAT, so with 3:51 left in the half, Van Meter would be up 15-0. It didn’t take long for the Bulldogs to create yet another turnover as Ganon Archer would get his first interception of the season on Panorama’s next possession. With only 6 seconds remaining before halftime, Jack Pettit would hit Archer with a 12 yard pass for a touchdown. Tost would again add the PAT and Van Meter would score 22 points in the final 6:32 of the 1st half to take a 22-0 lead. 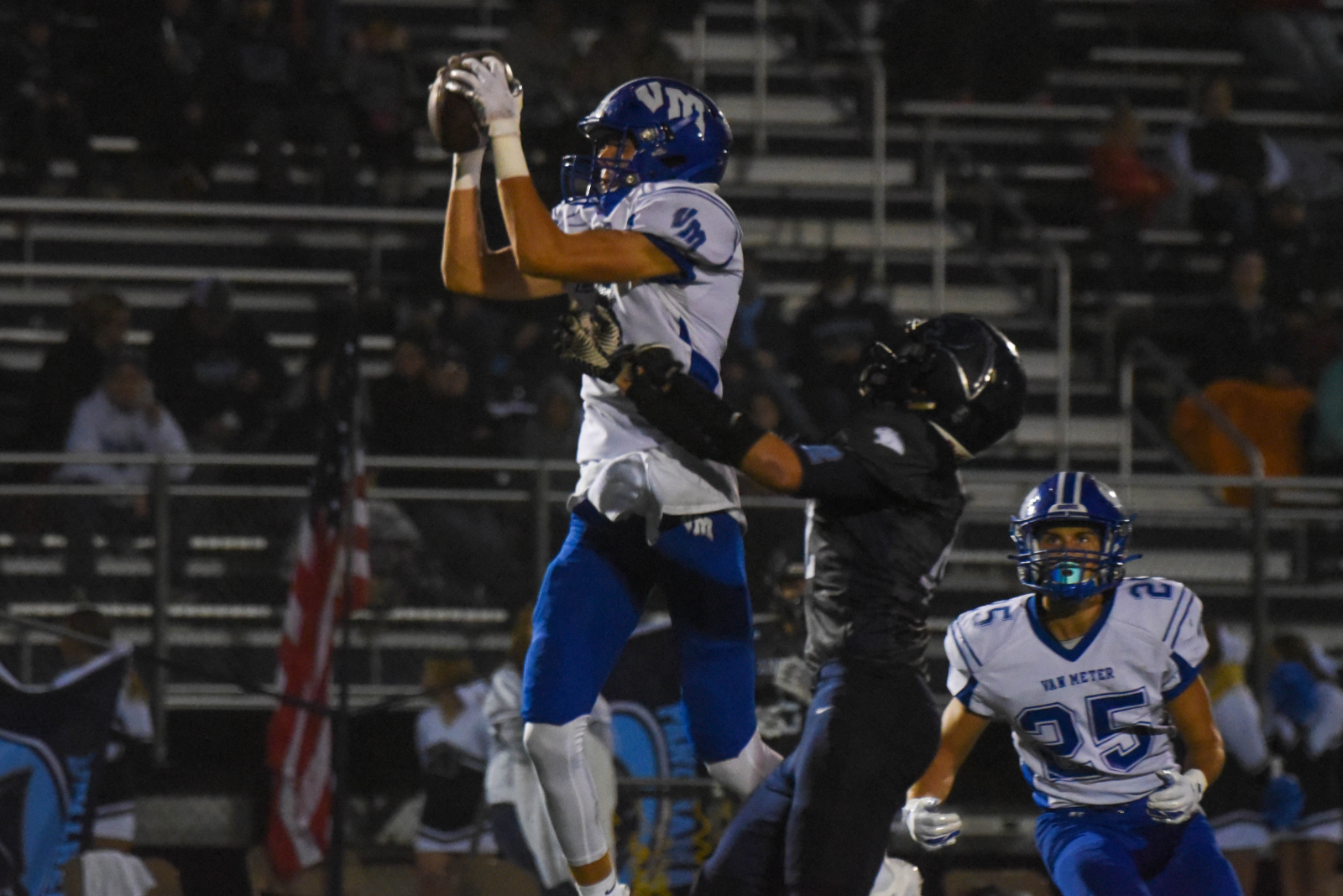 Panorama would attempt to mount a comeback to start the 2nd half as they would recover an onside kick and proceed to drive down to the Van Meter 3 yard line. However, the Bulldog defense would stop 4 consecutive Panther running plays to keep them out of the end zone and give the ball back to their offense. Van Meter would move the ball off their goal line but a fumble would give the ball back to the Panthers on the Van Meter 26 yard line. This time Panorama would drive down to the Bulldog 11 yard line, but the Van Meter D would step up once again with Allen Van Pelt batting down a pass in the end zone on 4th down.

The Van Meter offense would move the ball out to their own 39 yard line where they would face a 3rd and 6 at the beginning of the 4th quarter. On the 3rd down play, Ganon Archer would throw a 61 yard pass to Chris Schreck for a touchdown that would put the game out of reach. Following an offsides penalty against the Panthers on the PAT attempt, Van Meter would choose to go for the 2 point conversion. Dalten Van Pelt would power his way into the end zone for the 2 additional points behind a strong push from his offensive line as Van Meter would put the finishing touches on a 30-0 victory. With the win, the Bulldogs move their records to 3-0 overall and 1-0 in district play.

Dalten Van Pelt would carry the ball 27 times for a career-high 199 yards and 2 touchdowns. This would be the most rushing yard by a running back for Van Meter since 2018. Chris Schreck would have a career-high 79 receiving yards to go along with his touchdown. Jack Pettit would again be very efficient in the passing game going 5 for 8 for 58 yards and 1 touchdown. Ganon Archer had a very versatile night as he would have 1 interception, 1 receiving touchdown, and 1 passing touchdown. On the other side of the ball, Van Meter’s defense would limit the Panorama offense to only 20 yards rushing, which are the fewest yards rushing by a Bulldog opponent in the last three seasons. Overall, the Bulldog defense would limit the Panthers to 116 total yards of offense as Panorama would only average 2.5 yards per play. Finally, Panorama would only be able to convert 2 of 10 3rd down attempts and only 1 of 5 4th down attempts. 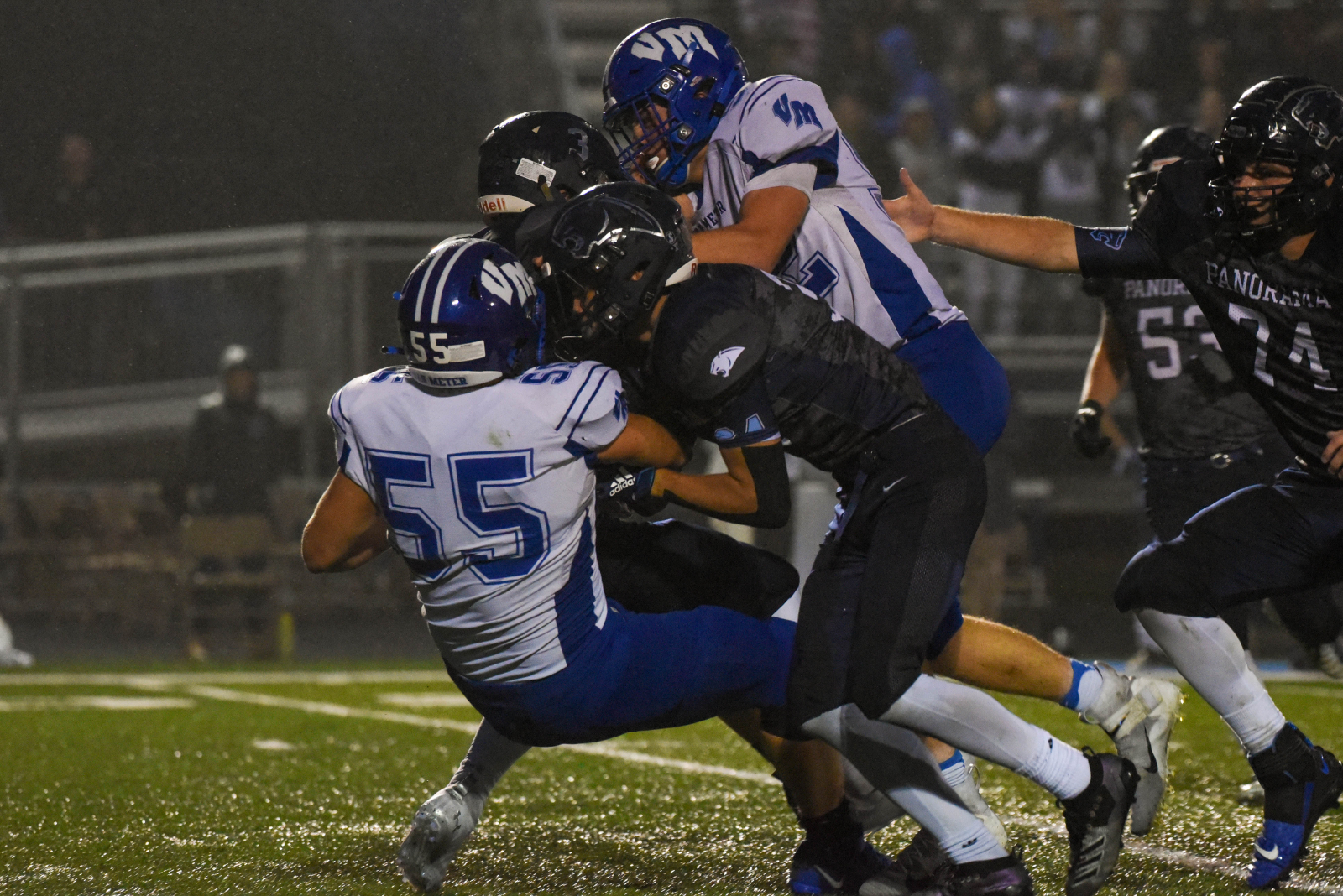 Please click on the following link for complete offensive and defensive stats from the game:
Van Meter 30 – Panorama 0 (Game Stats)

Click Here for Week 3 Football Scores from the IHSAA