Van Meter hosted the Earlham Cardinals in the first home game of the season for the Bulldogs. Both teams started the season last week with victories as Van Meter beat Winterset and Earlham outlasted AC/GC, so both squads entered the contest at 1-0. However, it would be the Bulldogs who would take control early and cruise to a convincing 40-0 victory over the Cardinals.

After the opening kickoff of the game by Caden Tost sailed into the end zone for a touchback, Earlham would only gain 4 yards on their first 3 plays as the Bulldog defense would prove to be very tough on this night. Following the Cardinal punt, Van Meter would need less than a minute to score on its fourth play of the game on a 24 yard touchdown pass from Jack Pettit to Allen Van Pelt to put the Bulldogs up 6-0. Earlham would put together an 11 play drive on the Cardinal’s next possession but would be forced to turn it over on downs at the Van Meter 46 yard line. The Bulldogs would only need 2 plays this time to find the end zone as Pettit would score on a 36 yard run. Following the PAT by Tost, Van Meter would extend its lead to 13-0 at the end of the 1st quarter.

Following a third consecutive touchback by Tost, the Cardinals would only be able to drive to the 50 yard line on their next possession before being forced to give it back to the Bulldogs. Four plays later, Dalten Van Pelt would get his first touchdown of the night on a 10 yard run and Van Meter would build a 20-0 lead following another Tost PAT. Both teams would exchange punts on their next possessions, but the Bulldog offense would be back on the field following the first interception of the season for Van Meter by Carter Durflinger. Dalten Van Pelt would cap off the scoring for the first half with a 14 yard touchdown run right before half time. So after Tost added the PAT, the Bulldogs would lead 27-0 at the break.

Van Meter would add two scores in the 3rd quarter to put the game away. Dalten Van Pelt would get his third rushing TD of the game on a 14 yard scamper less than 2 minutes after the start of the 3rd quarter. The Bulldogs final score would come when Pettit found Calvin Sieck on a pass over the middle of the field with Sieck finishing off the catch and run for a 57 yard touchdown. That would make the final score 40-0 as Van Meter would not allow the Cardinals into the end zone for the Bulldogs first shut out of the season.

The Bulldog offense would generate 349 yards of total offense with a staggering average of 10.9 yards per play while only possessing the ball for 12:19 of the game. Meanwhile, Van Meter’s defense would limit Earlham to 202 yards of total offense and only 3.1 yards per play. It would be a dominating performance for the Bulldogs who ran only 32 offensive plays to amass 40 points. Van Meter was lead on the ground by Dalten Van Pelt who rushed 12 times for 106 yards. Pettit also had an outstanding game completing 7 of 8 passes for 104 yards and 2 TDs while also rushing 4 times for 66 yards and a touchdown. 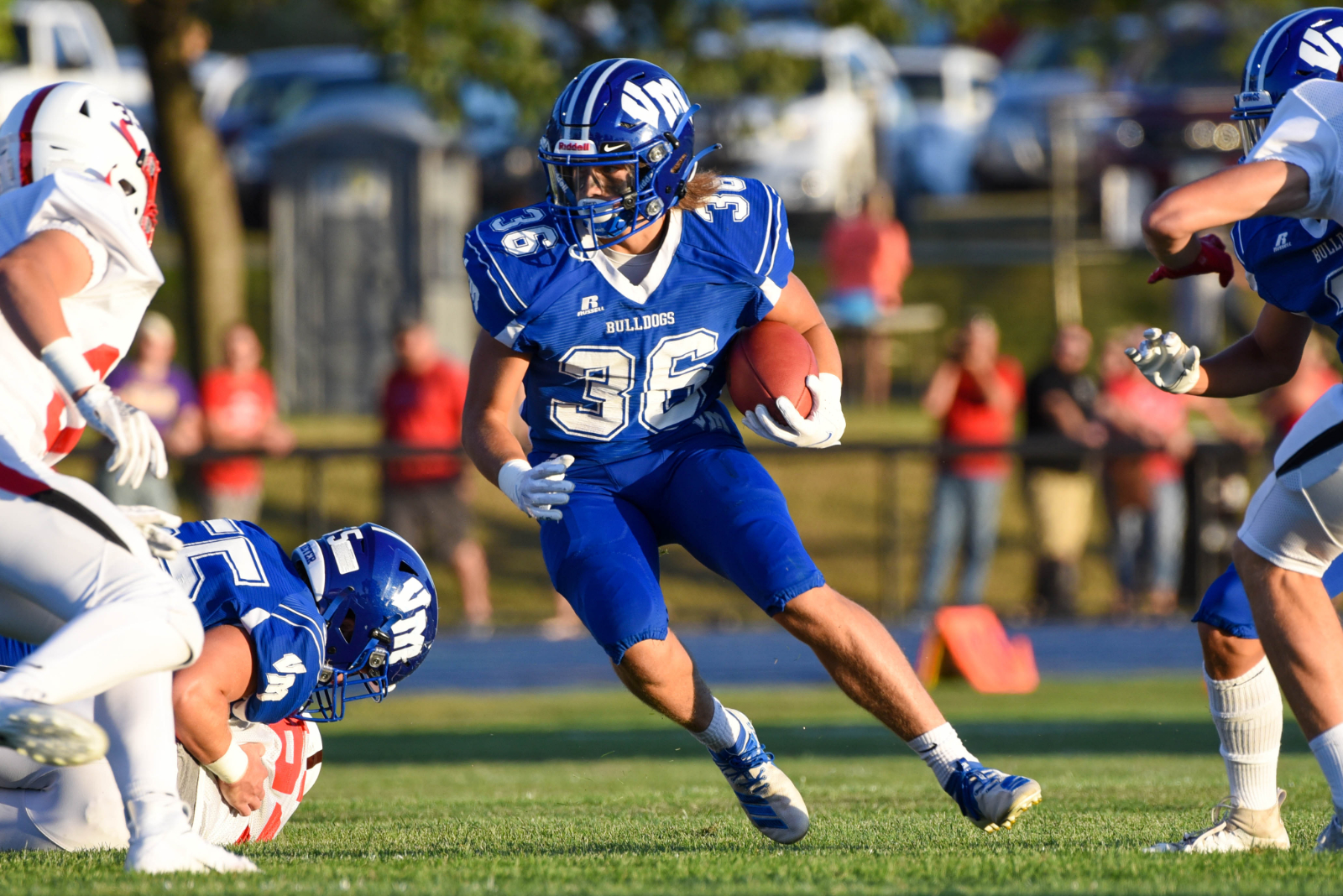 Please click on the following link for complete offensive and defensive stats from the game:
Van Meter 40 – Earlham 0 (Game Stats)

Click Here for Week 2 Football Scores from the IHSAA

Van Meter (2-0) will travel to Panora this Friday, September 11th as they will take on the Panorama Panthers (1-1) at 7:00 PM! It will be the first district contest for both teams.