Van Meter Earlham wrestlers competed at the District Tournament Saturday and qualified five for the State Tournament.  Big wins in the first round by Riley Harger at 120#, Tyler Haynes at 145#, and Bryce Cole at 152# propelled them into the state tournament with runner-up finishes 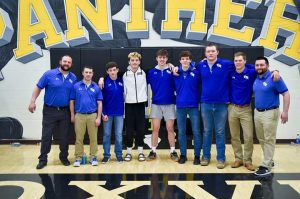 .  Caleb Swalla and Derrin Sesker continued to dominate as they have all season long.  Both finished as District Champions.  Senior Colby Wiederholt dropped an early match to returning state champ Matthew Lewis of Centerville before rebounding with a big win in the consolation bracket to set up a wrestleback match with Brock Beck of Grinnell.  Beck came out the winner in a close match ending Wiederholt’s season with a third place finish.  Freshmen Easton Padilla and Mason Drake both finished in fourth place on the day.

The Bulldogs begin the state tournament on Thursday at 1:30 at Wells Fargo Arena.