The Van Meter Bulldogs would encounter a familiar foe from two years again when they faced the Iowa City Regina Regals in the Class 1A State Semifinals. Van Meter had defeated the Regals for the 2017 State Championship and they would leave little doubt the outcome would be the same this time around. The Bulldog offense would score in every quarter of the game including multiple scores in the first three quarters, while the defense would put the wraps on an explosive Regina offense.

Regina would elect to receive the opening kickoff but they would be forced to punt after only three plays. Van Meter would waste little time making their presence known as they marched 61 yards in 9 plays with Anthony Potthoff opening the scoring for the Bulldogs on an 18 yard run. Zach Madden would add the PAT and Van Meter would have an early 7-0 lead. Regina would respond with a 13 play drive of their own but the Van Meter defense wouldn’t let them past their own 10 yard line and the Regals would be forced into a field goal to make the score 7-3. Just three plays later, Van Meter would strike again as Potthoff would find a wide open Parker Fryar for a 63 yard touchdown pass. Madden would add another extra point, as he would be perfect for the game, and the Bulldogs would go up 14-3 at the end of the 1st quarter.

Van Meter would keep things rolling at the start of the 2nd quarter as Potthoff would pass to Blade Koons on the very first play of their next drive for a 52 yard score and the lead would extend to 21-3. The Regals would try to hang tough as they would use 10 plays to drive 71 and score on 4th down and goal from the Bulldog 5 yard line to cut their deficit to 21-10. However, that would be as close as the Regals could get as Van Meter would break the game open with four unanswered touchdowns. On the Bulldog’s next possession, Potthoff would strike yet again on a 62 yard run behind some outstanding blocking by the offensive line and receivers and Van Meter would enter halftime with a 28-10 lead.

Regina would start the 2nd half with an onside kick they would recover, but Van Meter’s defense would rise to the occasion and once again force a 3-and-out and a Regal punt. The Bulldogs would put together their longest drive of the game as they would grind out 78 yards on 12 plays. Potthoff would once again dash into the end zone on a 13 yard scamper and the Bulldog lead would grow to 35-10. Regina’s next drive would end when their quarterback would fumble the ball on their own 42 yard line and Brett Berg would be there for the recovery. Van Meter would capitalize on this opportunity with a 6 yard touchdown run by Carter Durflinger for his first career touchdown and the Bulldogs would lead 42-10 at the end of the 3rd quarter.

With 7:23 remaining in the 4th quarter, the Bulldogs would find the end zone for the last time on a 2 yard run by Durflinger as many Bulldog players would see action on both sides of the ball. Iowa City Regina would add one more score of their own with 5:38 remaining in the game as the final score ended up at 49-17.

This semifinal win would be a total team effort by the Bulldogs as they rolled up 473 yards of total offense (305 yards rushing and 168 yards passing), while the Van Meter D would hold the Regals to only 290 yards of total offense including only 81 yards rushing. This would be the 6th time in 12 games that the Bulldog defense would hold an opponent below 100 total rushing yards in a game. Anthony Potthoff would lead the Van Meter offense on the ground as well as through the air. Potthoff would rush for 138 yards on only 9 carries and he would complete 8 of 10 passes for 168 yards. 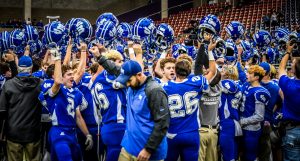 According to the IHSAA Post-Season Manual, ticket prices for the Semifinal Round games will be $10 per person.

Van Meter (12-0) will meet West Lyon (11-1) in the Class 1A State Championship game of the IHSAA playoffs at 10:00 AM this Friday, November 22nd at the UNI-Dome in Cedar Falls! This will be the second meeting between the Bulldogs and Wildcats after facing each other two years ago in the 2017 Semifinal game.

No Events This Week

Events are added by athletic staff.
View All Events