The Van Meter Bulldogs and the South Central Calhoun Titans squared off this past Friday night in a battle of 10-0 teams that both had their sights set on the state semifinals at the UNI-Dome next Saturday. In what was sure to be a tough game, both teams delivered an instant classic of two outstanding defenses, as the Bulldogs ranked #1 in Class 1A in scoring defense and the Titans were #2, and offenses that thrived on ball control and capitalizing on limited opportunities.

The Bulldog defense started strong as they would force the Titans to punt after their first three offensive plays. Van Meter’s offense would take over after the punt and drive 40 yards on 11 plays only to turn the ball over on downs. On the Titan’s second possession, Brett Berg would get a sack and forced fumble on the visitor’s second play from scrimmage that would be recovered by the Bulldog’s Patrick Junker to give the ball back to the Van Meter offense. This time the home team would drive to the Titan 15 yard line and Zach Madden would convert his second field goal of the season from 32 yards out for an early 3-0 lead early in the 2nd quarter. 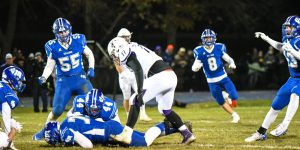 South Central Calhoun would respond with a 73 yard drive to score with 7:19 remaining before halftime to take a 6-3 lead following a blocked PAT by Parker Fryar. Not to be outdone, the Bulldogs would respond in a big way with their own 73 yard drive on 12 plays. Dalten Van Pelt would punch it across the goalline behind some outstanding blocking to score on a 1 yard touchdown run. Madden would add the extra point and Van Meter would regain the lead 10-6 with 1:29 remaining in the 2nd quarter. The Titans would attempt to answer however the Bulldog defense would stiffen and force a 25 yard field goal attempt by SCC that would sail wide right, so Van Meter would maintain that 10-6 going into the halftime break.

The second half wouldn’t see either team add any points on the scoreboard as Van Meter would only have three possessions in the entire half but SCC would only get one possession in each quarter. There would still be plenty of exciting moments as the tension mounted for a wide finish. The 3rd quarter would start with Van Meter receiving the opening kickoff of the 2nd half, however they would have to punt. The Titans would proceed to put together a 17 play drive to drive deep into Bulldog territory. However, Korbin Barck would get a 5 yard tackle for loss on 1st and 10 on the Bulldog 16 yard line to put the Titans off schedule. SCC would proceed to throw three incomplete passes in the end zone and Van Meter’s defense would hold.

Both teams would exchange punts to start the 4th quarter, before the Bulldogs would take over with 8:12 remaining in the game on their own 23 yard line. After the first two plays of the drive, the offense would find themselves facing a 3rd and 20 following a Titan sack. Anthony Potthoff would connect with Madden down the left sideline on a 40 yard pass to extend the drive. 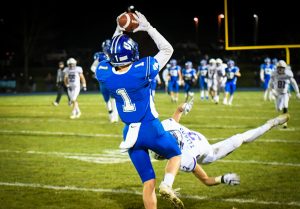 Following two more 3rd down conversions and running 10 more offensive plays, the Bulldogs would face a 4th and 18 from the SCC 22 yard line with 1:04 remaining in the game. Van Meter would elect to go for it as they returned to the field following the timeout. Potthoff would proceed to throw a perfect pass between two Titan defenders and Blade Koons would haul in the 2o yard strike to give the Bulldogs the game ending 1st down. The Bulldogs would take a final knee that would send them back to the UNI-Dome for the 5th consecutive season. 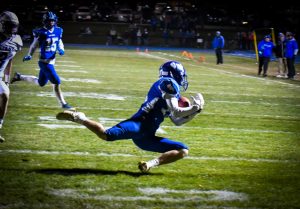 While the 10 points scored was the fewest in a win since an 8-7 victory over Guthrie Center in 1987, Van Meter was effective in controlling the ball for a staggering 30:49 of the game. The Bulldogs would outgain the Titans, 264 to 235 in total yardage, while also converted 7 of 14 3rd down conversions and 3 of 4 4th down conversions. Anthony Potthoff would end the game completing 12 of 18 pass attempts for 174 yards. Van Pelt would lead the Bulldogs rushing effort with 68 hard-earned yards on 25 carries against a tremendous Titan defense. Not to be outdone, the Van Meter defense would not allow a single SCC running back to rush for more than 47 yards as well as holding the Titan passing game to only 87 yards through the air.

According to the IHSAA Post-Season Manual, ticket prices for the Semifinal Round games will be $10 per person.

Van Meter (11-0) will meet Regina, Iowa City (9-2) in the Semifinals of the IHSAA playoffs at 10:00 AM this Saturday, November 16th at the UNI-Dome in Cedar Falls! This will be the second meeting between the Bulldogs and Regals after facing each other two years ago in the 2017 State Title game. The winner will move on to the IHSAA Class 1A Championship at the UNI-Dome in Cedar Falls on Friday, November 22nd.

UNI has updated and changed the link for fans to purchase tickets on-line.