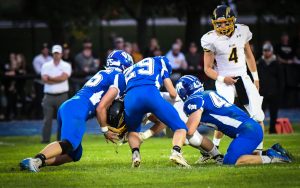 Van Meter hosted the AC/GC Chargers this past Friday night as their opponent for 2019 Homecoming. Both teams had completed the non-district portion of their schedules at 4-0, but this would be the first district game so the stakes were raised as teams begin the battle for the playoffs in Class 1A District #8.

Efficiency was the name of the game for the Bulldogs on this particular night, especially on the offensive side of the ball. The Van Meter defense would stop the Charger offense on 4th & 3 on their first possession right at midfield. Ian Abrahamson would get things rolling on the very next play as he would find daylight behind a huge push from his offensive line and scamper 50 yards for a touchdown on the very first play of the game for Van Meter. Zach Madden would again be perfect on his PATs for the night, so Van Meter jumped out to a 7-0 lead with 6:09 left in the 1st Quarter. After the Van Meter defense forced AC/GC to punt after only 3 plays, the Bulldogs would drive 52 yards on 6 plays in only 3 minutes to score again on a 1 yard run by Anthony Potthoff to make it 14-0 as the 1st Quarter would come to an end.

The Bulldog offense would then proceed to put up 21 points in the 2nd Quarter on only 8 total offensive plays. Chris Schreck would haul in a 49 yard pass from Potthoff on the first play of the drive. Following a blocked punt by Blade Koons, the Bulldogs would strike again on the very next play as Potthoff would carry the ball 8 yards for his second rushing TD of the game. Abrahamson would cap off the scoring in the 1st Half on an 11 yard run to put the Bulldogs up 35-0 at halftime.

Van Meter would add another score on their first drive of the 3rd Quarter as a 23 yard pass from Potthoff to Blade Koons would cap off a 9 play, 55 yard drive to put the Bulldogs up 42-0. AC/GC would find the end zone with 5:55 remaining in the game to make the final score 42-8.

The Bulldog D did an excellent job all night as well. AC/GC came into the game averaging 435 yards rushing per game which was good for the #2 rushing offense in all of Class 1A while also averaging over 50 points per game. Van Meter’s defense was up to the task though as they limited their opponent to only 119 yards rushing and 128 yards of total offense, while forcing 6 punts on the night.

Please click on the following link for complete offensive and defensive stats from the game: Van Meter 42 – AC/GC 8 (Game Stats)

Van Meter (5-0) will host West Central Valley (0-5) this Friday, October 4th at Bulldog Stadium at 7:00 PM. It will be Youth Football Night this Friday, so all youth football players in grades 3-6 and the youth football coaches will be our guests and will be recognized at halftime.