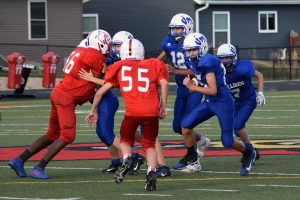 The Bulldogs traveled to Earlham on Sept 26th to take on the Cardinals. The Bulldogs came away victorious by a score of 22-8. Van Meter found themselves in an early deficit trailing 8-0 after the first Cardinal possession, but the Bulldogs’ confidence never wavered and went on to score 22 unanswered points.

The Bulldogs used a plethora of offensive weapons to move the ball up and down the field, but Charlie Matt was the one who found the endzone all three times. He scored on a 54 yard run, 4 yard run, and a 12 yard run. The successful 2pt conversion came on a brother connection with Cason Peterson finging Cohen Peterson open on a slant route. Garrett Cole, Tommy Kelly, Caleb Moore, and Sage Yazzie also had the ball in their hands quite often to contribute to the offensive production.

The Bulldogs move their record to 2-0 and now look forward to taking on Ogden on Thursday Oct. 3rd.