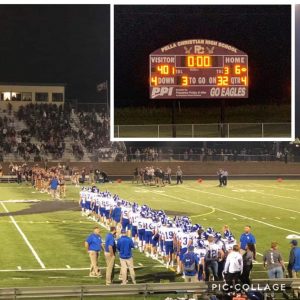 The Van Meter Bulldogs traveled to take on the Pella Christian Eagles for their first road game of the 2019 season this past Friday night. In a match-up of two teams that both made the Class 1A Semifinals one year ago, the Bulldogs controlled the game from start to finish with a solid effort on both sides of the ball for a dominating 40-6 win to move their record to 2-0 for the season.

Van Meter received the opening kickoff and wasted little time kicking things into high gear. Anthony Potthoff would find Blade Koons for a big 39 yard completion on 3rd & 9. Two plays later Potthoff would again find Koons for a 22 yard reception that set the Bulldogs up on the Eagle’s 1 yard line. Ian Abrahamson would do the rest from there to put Van Meter up 6-0 with a 1 yard run behind a huge push from the Bulldog offensive line. Zach Madden would tack on the PAT for a 7-0 lead early in the 1st quarter. A couple of possessions later the Bulldog D would come up big. On 3rd & 10 from their own 36 yard line, Pella Christian would be intercepted by Parker Fryar to set Van Meter up with great field possession. On the very next play, Potthoff would rush 34 yards to extend the lead to 13-0 at the end of the 1st quarter.

The defense would force the Eagles to punt after only 3 plays on their next possession. Van Meter would then go on a punishing 11 play drive that would cover 73 yards to start the 2nd quarter. Abrahamson would punch it in from 5 yards out for his second rushing TD of the night. Madden would add the PAT and the Bulldogs would now lead 20-0. Madden would also come up big for the road team as he would end the Eagles next possession with an interception inside the Bulldogs 15 yard line. This would allow Van Meter to go to halftime with that 20 point lead.

Pella Christian started the 3rd quarter with a renewed sense of urgency as they would march 62 yards on 12 plays for their first score of the night to cut the Van Meter to 20-6. However, the Bulldogs would regain complete control of the game as Potthoff would burst through for a 54 yard touchdown run. Madden made the PAT for a 27-6 lead. After the Bulldog D forced yet another Eagle punt, Dalton Van Pelt would follow some outstanding blocking for his first score of the game on a 21 yard run for a 33-6 lead with 4:35 remaining in the 3rd quarter. The Pella Christian offense would not threaten the rest of the evening as the Bulldog defense was just too much. Van Meter’s offense would continue to execute well late in the game as Van Pelt would add one more score on an 11 yard run, and with Madden adding the PAT again, the Bulldogs would bring the game to a close with a 40-6 win.

One week after the passing game only accounted for 26 yards, Anthony Potthoff would complete 7 of 10 passes for 141 yards to 4 different receivers who did a great job of catching the ball. Potthoff would also lead all Bulldog rushers with 138 yards on 14 carries. Dalten Van Pelt would have his first 100 yard game of his career with exactly 100 yards rushing on 11 carries. Cody Coffman had 2 catches for 63 yards and Blade Koons would have 2 catches for 61 yards to lead the Van Meter receiving corps. The Van Meter offense would rack up 456 total yards on only 52 plays for a staggering 8.8 yards per play. Finally, Van Meter’s defense held Pella Christian to only 11 first downs and only 209 total yards (127 yards rushing and 82 yards passing). The Bulldogs were especially stingy on 3rd downs as the Eagles were only able to convert 3 of 14 3rd down attempts.

Van Meter will host the Madrid Tigers at home next Friday, September 13 at 7:00 PM!

No Events This Week

Events are added by athletic staff.
View All Events